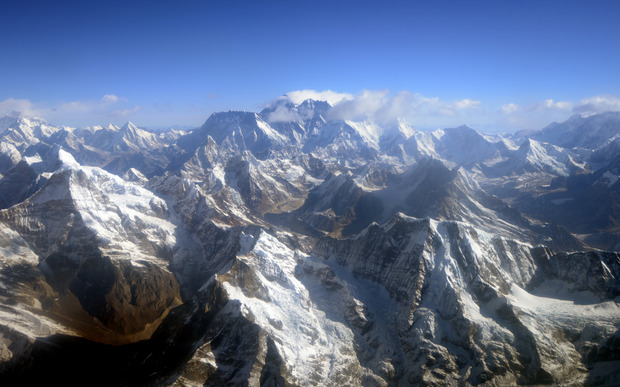 An aerial view of Mt Everest, centre, amid the Himalayan mountain range taken in 2013. Photo: AFP

Tourist flights are not allowed above Base Camp (5364m), and Sherpas are concerned vibrations from the helicopters could trigger avalanches if they fly to the upper reaches of the mountain.

But helicopter companies have said their flights over sights like the Khumbu Icefall (5486m) are permitted.

There has been no expedition on Everest for the past two years because of a series of disasters.

Sixteen Sherpas died in an icefall on their way to Camp One in 2014, and at least 18 climbers died at Base Camp after a major earthquake triggered a huge avalanche last year.

After the 2014 disaster, authorities moved the climbing route to the middle of the Khumbu Icefall - a treacherous section that mountaineers must cross on their way up Everest's summit. 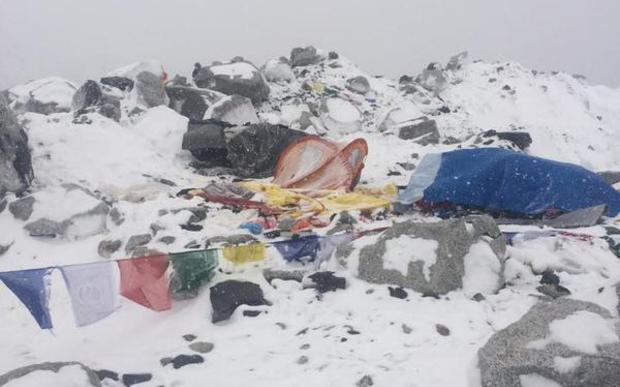 Sherpas are currently transporting expedition equipment to higher camps for the climbing season.

A mountain guide with a military expedition on Everest, Pasang Kaji Sherpa, said the sightseeing helicopters were hovering above the Khumbu Icefall and making things difficult.

"We worry that the vibrations caused by helicopters can crack ice blocks and snow packs on mountains overlooking the Khumbu Icefall.

"There is a deep-seated fear among Sherpa porters that they may be hit by avalanches this year as well and these helicopters are increasing fears." 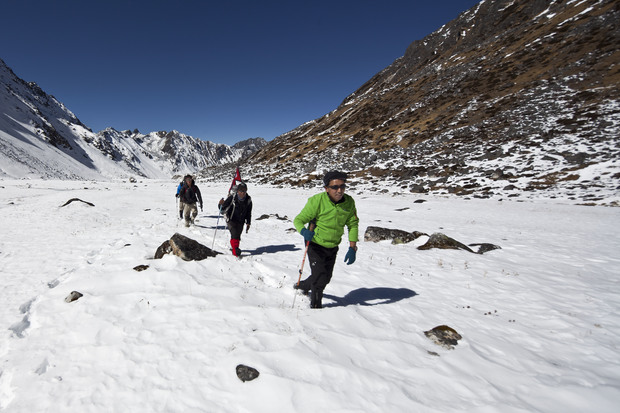 After the BBC started to investigate whether sightseeing helicopters were permitted to fly to places like the Khumbu Icefall, the Civil Aviation Authority of Nepal (CAAN) issued a circular to all airlines warning them not to conduct such flights.

"We have made it clear in the circular that sightseeing flights are simply not allowed in places higher than the base camp," said Rajan Pokhrel, Deputy Director General of CAAN.

"Only rescue flights during emergencies are allowed in those areas and sometimes we allow special projects like skydiving when recommended by other government authorities."

However, airline officials said there was no such danger.

"We fly 2340 feet from above the ground and maintain at least 1km distance from the mountains so there is no way the vibration can cause avalanche," said Pabitra Karki, chairman of Airlines Operators Association Nepal (AOAN).

"We use the French-made Ecureil helicopters for sightseeing which are very light and we carry two to three passengers in each flight."

AOAN officials said there were around half a dozen sightseeing flights per week during the climbing season.

But other sources at Base Camp said such flights were becoming more frequent.

About 20 helicopters were operated by six companies in Nepal but only a handful of pilots are qualified to fly to high altitudes.

"The fragile snow and ice conditions could be disturbed at any time by the rotors of helicopters and that could spell disaster for us.

"This is an issue we have been discussing for quite some time now but we are not sure where to lodge the complaint."

Scaling Mount Everest is the dream of many climbers who are prepared to pay a lot of money to reach the summit.

Aviation experts said part of the problem is how such flights are policed by the authorities.

Officials from CAAN admitted they were not on the ground to monitor flights but relied on other government agencies based there.

"Just because we are not there does not mean we don't get to know what happens up there," Mr Pokhrel said.

In addition, the Department of Tourism has allowed helicopters to transport ropes and other gear up to Camp One to fix the route, after expedition operators complained that the earthquake had made the Khumbu Icefall more difficult to cross.

"We fear that such a concession may be misused for more sightseeing and other commercial purposes and increase the risk of avalanche in the region," said Phurba Namgyal Sherpa.