ANALYSIS: The crazy US primary season is now into its third act with just nine states still to vote, but shows no sign of either slowing down or maturing. 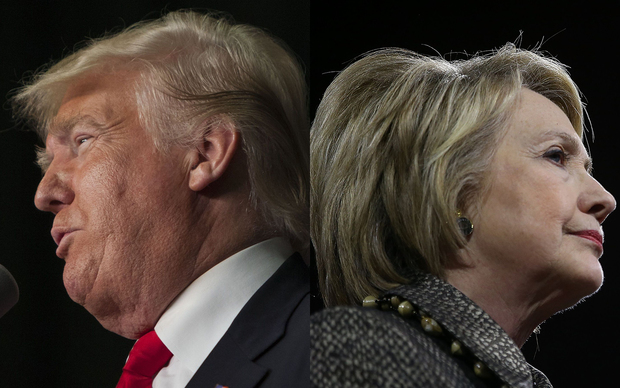 Five north Atlantic states had primaries this week, together known as the 'Acela Primary'. Hillary Clinton won big, Donald Trump won 'yuge', but it was the losers who were more noteworthy.

Republican frontrunner Donald Trump was expected to do well, but out-performed both polls and pundits. He won all five states, every county, most demographics and nearly every delegate - 110 of 118.

He won areas he was not expected to win to an extent that the New York Times' Nate Cohen has started wondering whether there's been a shift.

The Donald announced "it's over" and called himself the presumptive nominee. Before Tuesday Mr Trump needed to gain 58 percent of the remaining available delegates; now he requires just 50 percent to reach the magic 1237 for nomination. But that's still harder than it sounds (see below).

Already Mr Trump has gained 9.9 million votes, more than Mitt Romney got throughout the 2012 primary.

Would-be Democratic nominee Hillary Clinton also won as expected, though only four states. She struggled, as usual, in the state where independents were also allowed to vote (Rhode Island), but she walloped Bernie Sanders on delegates (194 to 129), which is hard to do in the Democratic races where delegates are proportionally allocated.

Mrs Clinton is now just 242 delegates short of the nomination with 1276 as yet unallocated.

Mr Trump's rival Ted Cruz, by contrast, couldn't break 20 percent of votes anywhere, illustrating rather painfully that he really only appeals to a single constituency - the evangelicals, and not all of them. Being elected president on a solitary religious base would require an act of God.

It's a distraction but it also looks desperate; Ms Fiorina performed so dismally with voters herself, she withdrew from contention after just two races. Mr Cruz is gambling that Ms Fiorina will help him pull in female Republicans. He needs all the help he can get.

Historically the only person who has ever named a running mate prior to selection is Ronald Reagan in 1976 - for him it was also a ploy based on desperation and it backfired badly.

Fellow Republican John Kasich also had a dreadful day. Outside of his home state of Ohio, he hasn't been vaguely competitive, suggesting it was a poor year to be running as the grown-up in the room. He's been hoping to be the sensible compromise choice at the convention but he's not making a good argument on vote appeal, even for the Rust Belt.

Meanwhile, there is really no viable way to the nomination for Senator Sanders. By one count, if he won 60 percent of the remaining delegates and turned 40 percent of Mrs Clinton's superdelegates, he still wouldn't reach the required total. And that's well beyond him.

If he had the Democratic Party's best interest at heart, he would call it quits now in return for policy concessions. But he isn't a Democrat, he's an independent. In a tacit acknowledgement of his position, Mr Sanders is laying off staffers but has declared he'll stay in the race till the end, which just makes the general election harder for Mrs Clinton, who is being forced to spend money on a dead rubber.

I suspect the Ralph Nader inside Bernie Sanders is shouting 'damn the outcome, I've got a point to make'. However, Mrs Clinton also took a while to see the writing on the wall in 2008.

That said, Senators Sanders and Cruz will have an easier time in some of the next few races. The Atlantic Primary was in strongly Trump territory and he's also looking good in for the coming races in New Jersey and West Virginia.

But Montana, South Dakota and Nebraska are Cruz territory. So expect headlines to suddenly declare that Ted Cruz's announcement of Carly Fiorina has changed his dynamic, even though it won't have.

It comes down to California

The continued uncertainty about whether Donald Trump will manage to cross the line is based on just two coming states of which there are few polls: California and Indiana, which both have a lot of delegates to offer.

It's going to go down to the wire.

Donald Trump has added a swathe of pros to his team recently, including the former campaign managers of Ben Carson, Scott Walker and Chris Christie, as well as the lobbyist Paul Manafort.

Mr Manafort has reportedly previously worked for suspected drug despots, torturers and dictators. It's like Donald Trump is attempting to live out a storyline from Doonesbury and hired Uncle Duke.

As Bloomberg said "Trump just hired his next scandal". Within a couple of days, he had demoted him again, reportedly for trying to make him act presidential.