Brazilian President Dilma Rousseff has held last-minute talks with lawmakers - a day before Congress votes on whether to impeach her. 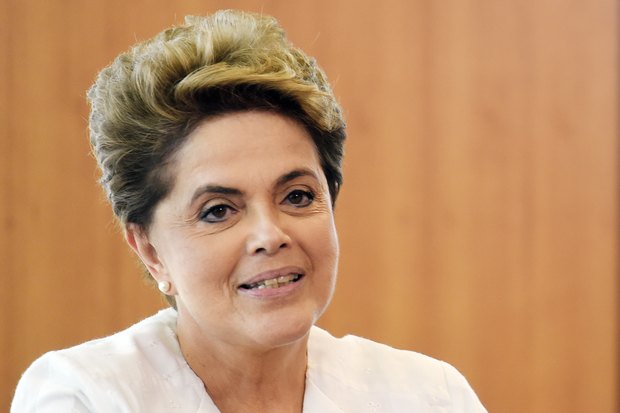 She had been due to attend a rally but instead has been lobbying congress members and party leaders for support.

Ms Rousseff is accused of manipulating government accounts. She says her opponents are mounting a "coup".

Meanwhile, presidential supporters and opponents are holding rival rallies in the capital Brasilia.

Metal barriers have been built outside the parliament building to keep the groups apart to prevent possible clashes.

Latest estimates suggest those in favour of impeachment have just enough votes for the motion to carry.

Stepping up her bid for survival, Ms Rousseff wrote in the Folha de Sao Paulo newspaper (in Portuguese): "They want to convict an innocent woman and save the corrupt," a reference to charges several politicians face.

She accused her opponents of "fraud and lies in an attempt to dismiss a legitimately elected government and replace it with a government without legitimacy".

Denying she had committed any crime, she said: "This is a coup against the republic, against democracy and above all against the votes of all Brazilians who participated in the electoral process."

The lower house of parliament began its debate on impeachment on Friday and a vote is expected on Sunday.

The rowdy session went through the night and has continued on Saturday.

If two-thirds back impeachment, it goes to the Senate, where a simple majority would suspend the president and instigate a trial.

On Tuesday, Ms Rousseff, 68, suggested that Vice-President Michel Temer was one of the ringleaders of the "coup" attempt against her.

She said a widely distributed audio message of Mr Temer appearing to accept replacing her as president was evidence of the conspiracy. However, she did not identify him by name.

Ms Rousseff has also indicated lower house speaker Eduardo Cunha is among those trying to oust her. He is himself facing money-laundering and other charges.

Lower house vote: An impeachment vote is due in the lower house on Sunday. A two-thirds majority is required for it to go forward to the Senate.

Senate vote on trial: If Ms Rousseff's case is sent to the Senate, a simple majority is enough to suspend her for up to 180 days while she is put on trial. Vice-President Michel Temer would step in during this period.

Impeachment vote: For Ms Rousseff to be removed from office permanently, two-thirds of the Senate would have to vote in favour. Mr Temer would remain president for an interim period should this happen.