Donald Trump campaign manager Corey Lewandowski has been charged with assaulting a journalist at a campaign event. 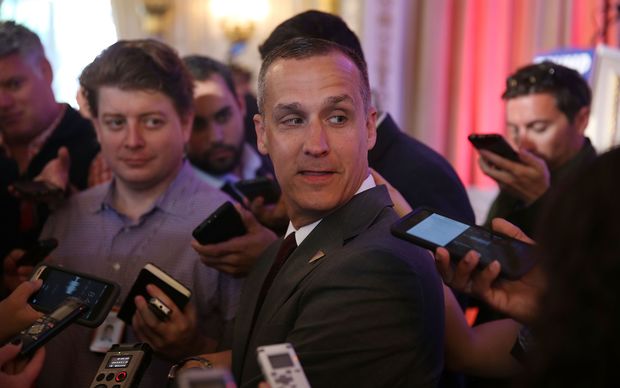 Mr Lewandowski is charged with simple battery for his encounter with former Breitbart reporter Michelle Fields.

Police allege that on 8 March after a news conference in Florida, he grabbed her arm when she tried to ask Mr Trump a question, leaving a bruise.

Mr Lewandowski plans to plead not guilty, the Trump campaign said in a statement.

Police in Jupiter, Florida, where he was arrested, have released new footage of the alleged assault:

"Mr Lewandowksi is absolutely innocent of this charge," the Trump statement said. "He is completely confident that he will be exonerated."

Mr Trump himself has defended Mr Lewandowski on Twitter, saying the police footage showed there was "nothing there".

The charge comes during a difficult time for Mr Trump, just ahead of next week's Wisconsin primary where he is neck-and-neck with Senator Ted Cruz.

Mr Trump will participate in a CNN town hall event on Tuesday night when all three Republican contenders will face questions.

He is currently well ahead in the Republican race with 739 delegates to Cruz's 465.

Ohio Governor John Kasich is some way behind with 143, with the 1,237 needed to win the nomination probably out of his reach.

In the Democratic race, Hillary Clinton will try in Wisconsin to stem the momentum of a resurgent Bernie Sanders, who is on a roll after a string of wins.