Mother Teresa, the Roman Catholic nun who worked with the poor in the Indian city of Kolkata (Calcutta), will be declared a saint on 4 September, Pope Francis has announced. 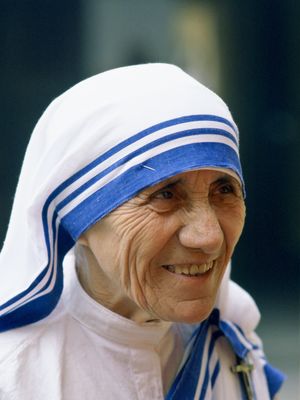 The Pope cleared the way for sainthood last year when he recognised a second miracle attributed to Mother Teresa.

Born in 1910 to Albanian parents, Agnese Gonxha Bojaxhiu grew up in what is now the Macedonian capital, Skopje, but was then part of the Ottoman Empire.

Aged 19, she joined the Irish order of Loreto and in 1929 was sent to India, where she taught at a school in Darjeeling under the name of Therese.

In 1946 she moved to Kolkata to help the destitute and, after a decade, set up a hospice and a home for abandoned children.

She founded the Missionaries of Charity in 1950. The sisterhood now has 4500 nuns worldwide.

She achieved worldwide acclaim for her work in Kolkata's slums, but her critics accused her of pushing a hardline Catholicism, mixing with dictators and accepting funds from them for her charity.

Five years after her death, Pope John Paul II accepted a first miracle attributed to Mother Teresa as authentic, clearing the way for her beatification in 2003.

He judged that the curing of Bengali tribal woman Monica Besra from an abdominal tumour was the result of her supernatural intervention.

A Vatican commission found her recovery had been a miracle after the Missionaries of Charity said the woman had been cured by a photo of the nun being placed on her stomach. The finding was criticised as bogus by rationalist groups in Bengal.

In December 2015, Pope Francis recognised a second miracle, which involved the healing of a Brazilian man with several brain tumours in 2008. The man's identity was not disclosed but the man was said to have been cured unexpectedly after his priest prayed for Mother Teresa's intervention with God.

It often takes decades for people to reach sainthood after their death, but beatification was rushed through by Pope John Paul II and Pope Francis was known to be keen to complete the process during the Church's Holy Year of Mercy, which runs to November 2016.

In an unrelated move, the Pope last week introduced new financial rules governing the process of becoming a saint, in response to allegations that some candidates supported by wealthy donors were likely to have their cases resolved faster than others.

Under the regulations, an administrator must be named for each prospective saint and should "scrupulously respect" the intention of each donation as well as manage the funds donated.

The cost to the Vatican can be high during the "Roman phase" of the process, when the Congregation for the Causes of Saints investigates the candidate, and there have been claims that officials failed to oversee how some donations were spent.