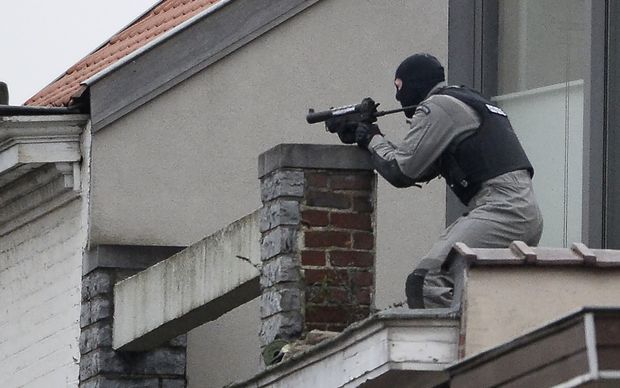 A member of the special forces takes position on a roof near the site of a shooting in the southern Forest district of Brussels. Photo: AFP

Up to two suspects are thought to be on the run after police raided a flat in the suburb of Forest.

Four police officers were wounded and a suspect armed with a Kalashnikov was shot dead outside the apartment, the Belgian prosecutor's office said.

It also said the investigation was likely to continue through the night.

The raid was linked to last year's Paris attacks in which 130 people died. Islamic State (IS) militants have claimed the attacks.

French police also took part in Tuesday's operation. One of the officers wounded in the raid was a French policewoman, officials said.

The federal prosecutor's office said police had gone to search an apartment in the southern suburb of Forest at about 3pm (3.15am NZ time) local time.

"During this operation, one or several people opened fire on the police as they came through the door," it said in a statement.

Three officers were injured then and a fourth in a later exchange of gunfire, it said. All four suffered only light wounds, officials said.

"A suspect armed with a Kalashnikov" was also killed at around 6pm local time in the street outside the flat, the prosecutors' statement also said.

The dead suspect has not yet been identified. However, a prosecutor's spokesman had earlier made clear it was not Salah Abdeslam - one of two suspects still on the run after the 13 November attacks in Paris.

French police sources had said earlier that he was not the target of Tuesday's raid.

The operation brought the area - close to railway lines used by high-speed trains to London and Paris - to a standstill.

Two local schools and two kindergartens were in lockdown for several hours before being evacuated by police.

While the operation at the flat has finished, a police source said the search was widening - and could possibly involve a second location.

The prosecutor's office said the investigation is "actively continuing, day and night" but gave no other details.

Anna Holligan at the scene said a huge police presence remains, with heavily armed officers on the streets and helicopters hovering overhead.

It was still unclear how many, if any, suspects remained at large, she said.

Since the 13 November attacks, officials have identified most of the people they believe to have carried out the assaults.

Most of the suspects either died during the attacks or were killed in later police raids.

In addition, 11 people have been arrested and charged in Belgium in connection with the killings. Another eight are still in detention.

Parts of Brussels were sealed off for days after the Paris massacre amid fears of a major incident. A number of suspected attackers lived in the Belgian capital.

Police have also carried out a series of raids in the city.