Germany is voting in regional elections being seen as a test of Chancellor Angela Merkel's refugee policy. 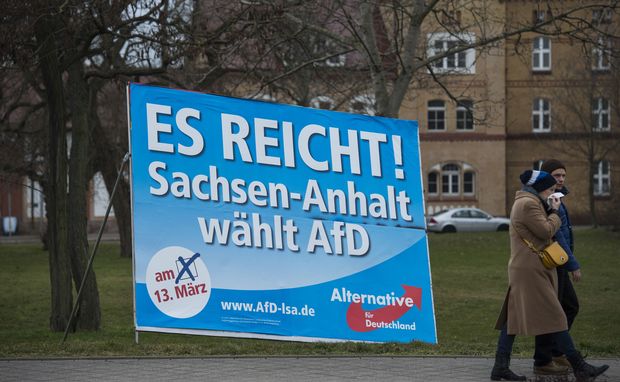 More than a million migrants and refugees entered Germany in 2015.

"I'm crossing my fingers," Mrs Merkel said when asked on Saturday how she was preparing for Sunday's elections.

Polls suggested that her Christian Democratic Union (CDU) would remain the biggest party in Saxony-Anhalt in the east of the country.

However, it faced a possible defeat to the Greens in Baden-Wuerttemberg in the west, where it was the largest party.

And in Rhineland-Palatinate, where the CDU came a close second last time, the race was on a knife edge.

Polls put the AfD's support as high as 19 percent in Saxony-Anhalt, where the CDU and the Social Democrats were governing in coalition.

If the AfD performs as well as the polls indicate, the coalition partners may need to team up with a third party to assemble a majority.

Already represented in five of Germany's 16 regional parliaments, the AfD campaigned on slogans such as "secure the borders" and "stop the asylum chaos".

German Vice-Chancellor Sigmar Gabriel said on Saturday that gains for the AfD would not change his government's stance on immigration.

"There is a clear position that we stand by: humanity and solidarity. We will not change our position now," he said.

But in Berlin, about 2000 right-wing demonstrators carrying German flags chanted "Merkel must go!" and "we are the people!". 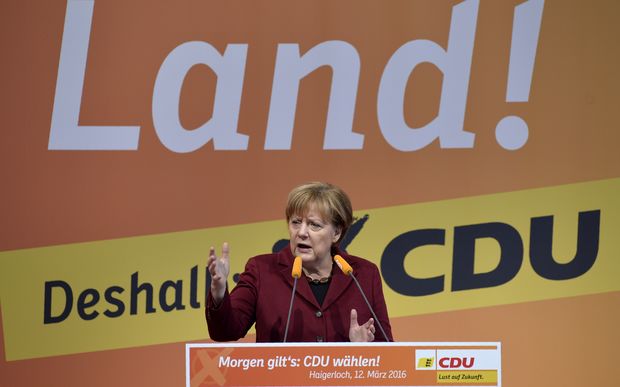 Poor results would put additional pressure on Mrs Merkel, just as she is trying to push through an EU deal with Turkey to reduce the numbers of migrants and refugees entering western Europe.

The chancellor alarmed many European leaders at a summit earlier this week by promoting a last-minute draft deal with Turkey to stop the migrant flow, and demanding their support.

Mrs Merkel still needed to complete that deal at another summit at the end of the week. If her party performed poorly on Sunday, she would go into that meeting weakened.

Many analysts were seeing the three regional elections as a test-run for the country's national election next year.

The meetings and demonstrations came as thousands of migrants massed in muddy camps in the Greek border town of Idomeni after countries across the Balkans closed their borders.