Riot police have used water cannon to disperse anti-migrant protesters in the German city of Cologne. 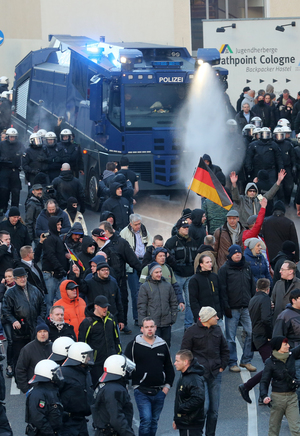 Right-wing groups, headed by the anti-Islam Pegida movement, gathered after reports emerged of a wave of sexual assaults on women on New Year's Eve.

Mrs Merkel has proposed changes to make it easier to deport asylum-seekers who commit crimes.

Hundreds of police were deployed in Cologne to tackle demonstrators, who threw firecrackers and bottles. Several arrests were made.

The New Year's Eve attacks, some of which were carried out by men of North African and Arab appearance, have led to criticism of Mrs Merkel's policies.

The police's handling of the events has also been sharply criticised.

Victims described chaos as dozens of sexual assaults and robberies were carried out with little apparent response from the authorities around Cologne station.

Mrs Merkel, speaking after a meeting of her Christian Democrat party leadership in Mainz, proposed tightening the law on denying the right of asylum for those who have committed crimes.

Under the new plans, those on probation could be deported too.

"When crimes are committed, and people place themselves outside the law... there must be consequences," she told reporters after the meeting. 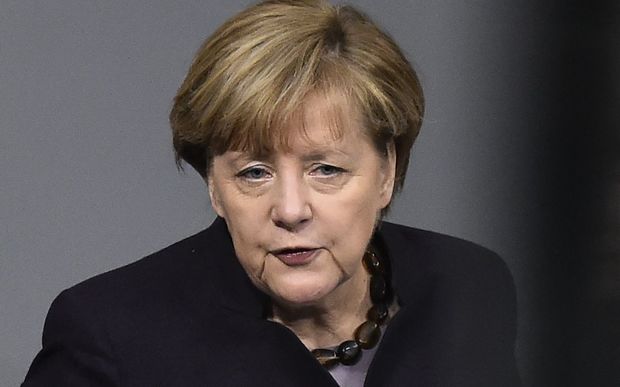 Under current German laws, asylum seekers are only forcibly sent back if they have been sentenced to at least three years' imprisonment, and providing their lives are not at risk in their countries of origin.

The move, which will still need parliamentary approval, follows the New Year's Eve attacks, which sparked outrage in Germany.

He added: "The full application of the criminal law against those who behave in the way that has apparently taken place is appropriate, and they should not be entitled to asylum.

"However, on the other hand, one must not overreact against a whole category of people."

Police also said on Saturday that the number of reported cases of violence on New Year's Eve had risen substantially.

A statement issued by Cologne police on Saturday (in German) said the number had reached 379 - 40 percent of them cases of sexual assault.

"Those in focus of criminal police investigations are mostly people from North African countries. The majority of them are asylum-seekers and people who are in Germany illegally," the statement said.

Germany has accepted more than a million migrants and refugees in the past year.

Officials have warned that anti-immigrant groups have been trying to use the attacks to stir up hatred.

Similar attacks to those seen in Cologne were also reported in Hamburg and in Stuttgart on New Year's Eve. In Bielefeld, hundreds of men tried to force their way into nightclubs, Die Welt reports (in German).

On Friday, the chief of police for North Rhine-Westphalia was suspended. Wolfgang Albers had been accused of holding back information about the Cologne attacks, in particular about the origin of the suspects.