Some families of MH370 passengers are suing Malaysia Airlines before a deadline two years after the plane's disappearance. 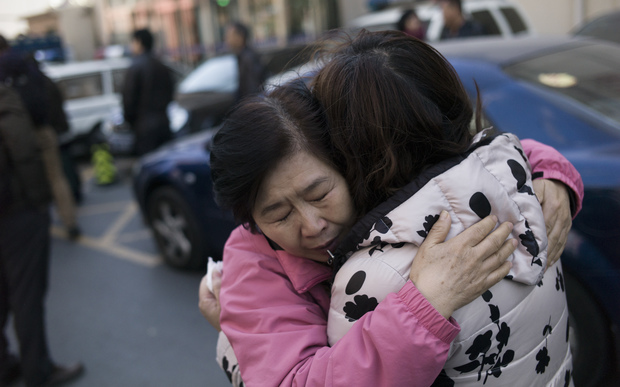 Relatives of 12 Chinese passengers on the flight have filed lawsuits in Beijing, one day before the deadline for launching legal action.

They said they wanted the courts to help establish what happened to the plane.

Families of another 32 passengers, mostly Chinese, have filed a separate lawsuit in Malaysia, their lawyer said.

MH370 disappeared on 8 March 2014 while flying from Kuala Lumpur to Beijing with 239 people on board.

Under international agreements, there is a two-year deadline on filing lawsuits seeking damages over air accidents, starting from when the flight should have arrived.

Zhang Qihuai, the lawyer for the 12 families in Beijing, said they were seeking a range of damages, but their goal was to determine the cause of the accident and those who were responsible.

Verdicts might not come for two years, he said.

The companies have not commented.

Many relatives were crying as they presented their documents to court officials. Some said they hoped to use the action to obtain more information about the case.

"Today we came to demand our people back. We come every day. We demand to have our people back everyday, we want our relatives," Dai Shuqin, whose sister was on board the flight, told Reuters.

In Kuala Lumpur, lawyer Ganesan Nethi said he filed a joint lawsuit on behalf of the relatives of 32 passengers last Thursday. He said most were Chinese, along with one American and a few Indians, AP reported.

The lawsuit named the airline, the Malaysian government and its air force and civil aviation department, he said.

It was not immediately clear how many lawsuits have now been filed in total or how many cases have been settled in relation to MH370.

Ships in the Indian Ocean are still searching for the missing Boeing 777, in an operation that is estimated to have cost more than $US130m ($NZ192m).

If confirmed, the object found by an American amateur investigator would be the second piece of known debris from the aircraft to be found.

Authorities found a piece of the plane's wing on the shore of Reunion island in the Indian Ocean last year.

The new find could provide fresh clues to the mystery of the flight. Based on satellite communications data, MH370 was thought to have crashed in the Indian Ocean.

An interim report would be released by the investigation team on Tuesday to mark the two-year anniversary of the disappearance, he said.