With leaders of Australia's political parties attending Sydney's Mardi Gras, some gay marriage advocates are demanding more than a plebiscite. 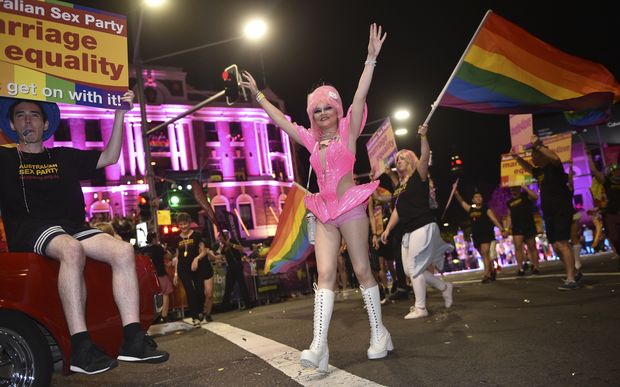 Malcolm Turnbull and his wife Lucy joined 300,000 other revellers at the Sydney Mardi Gras parade last night, and opposition leader Bill Shorten marched in it. It was the first time in history a sitting Australian Prime Minister had joined the annual gay and lesbian celebration.

The Australian government has promised to hold a plebiscite on same-sex marriage by the end of the year if re-elected.

However, that move has been criticised by Green Party leader Richard Di Natale, who said it would be divisive and open up the stage to groups who spread bigotry.

Meanwhile, Mr Shorten of the Australian Labor Party promised that if his party was elected at the federal election this year, it would introduce a bill within 100 days for marriage equality.

Government plans for a plebiscite

Attorney-general George Brandis confirmed the timing for the public vote today, adding it would be legislated by the end of the year if the public voted in favour of change.

However the bill for the plebiscite would not be made public before the federal election, which must be held by December, he said.

He believed such a bill would likely be carried and, if the public voted yes, parliament would follow.

"I've said in the party room when this matter was discussed last August that I thought this was a conscience matter and I haven't changed my mind," he said.

But he said it would be understandable if some politicians maintained their stance against the change.

"I think it would be perfectly understandable why a member of Parliament representing a conserve electorate and having conservative views themselves might choose to vote no. And I don't have a problem with that." 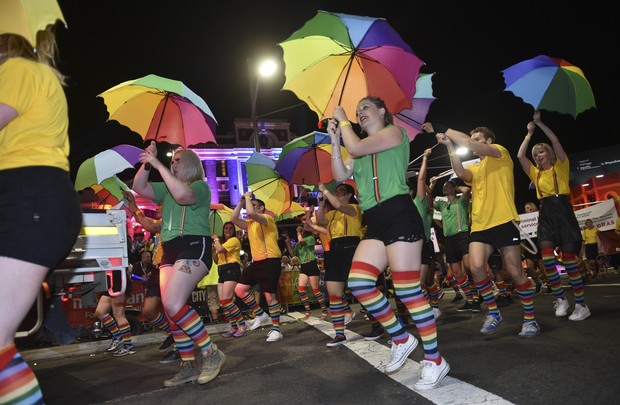 He said that personally, he was in favour of same-sex marriage.

"This is a position I've come to over the years and after a lot of reflection," he said.

"Treating gay people equally is, I think, one of the fundamental values of modern, Australian society."

The potential plebiscite - expected to cost up to $160 million - has been a matter of concern for some politicians, who fear the campaign could turn vitriolic.

Some say it's not enough

"Symbolism's good, having different leaders of all parties there, but let's back it up with some action," he said.

"He's got an opportunity to bring a vote with him on marriage equality but he's carrying on with Tony Abbott's divisive plan for a plebiscite."

Mr Di Natale said the public vote would give a voice to "groups who spread bigotry", and would "cause so much damage".

"I think the big problem for Malcolm Turnbull right now is that while there's been a change in Prime Minister, he's carrying on with Abbott-era policies," he said.

Senator Di Natale also referred to the debate over the Safe Schools programme, which has prompted heated commentary from politicians and the public alike.

Labor has pledged to call for a vote on same-sex marriage within 100 days if elected.

Mr Brandis said he was not concerned about the commitment.