The Antarctic icebreaker Aurora Australia has been refloated after running aground in Horseshoe Harbour, near Mawson Station in Antarctica. 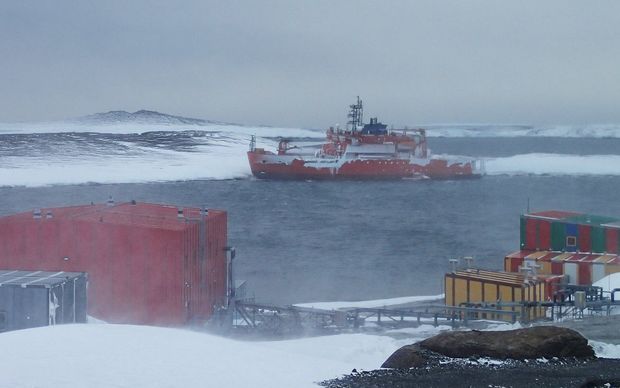 Thirty-seven expeditioners who had been trapped for several days have now been taken ashore.

The Australian Antarctic Division (AAD) said the icebreaker had broken free of its mooring lines during a blizzard on Wednesday afternoon.

The expeditioners and about 40 crew were stranded for more than two days. No-one was injured.

The icebreaker, chartered by the AAD, was pulled out from the rocks on the first attempt, using the ship's ballast. A full assessment of the damage is expected to take several days.

The ship is believed to be watertight but blizzard conditions are hampering a full assessment of damage to the hull.

It had been an anxious time for the crew since the ship was pulled from its moorings during winds of more than 170km per hour.

All the expeditioners were taken from the ship by barge on Friday afternoon to shore and are now at Mawson Station.

Aurora Australis was due to carry out a resupply mission to the sub-Antarctic Macquarie Island, as its last voyage for the season.

The AAD said winds of up to 130km/h were recorded just before the ship broke its lines.

The ship left Hobart on 11 January and had been involved in marine science efforts in Antarctic waters and arrived at Mawson Station for resupply last weekend.

The ship, which came into service in 1989 and is owned by P&O Maritime Services, is due to be replaced by a new $A500 million icebreaker in 2019.