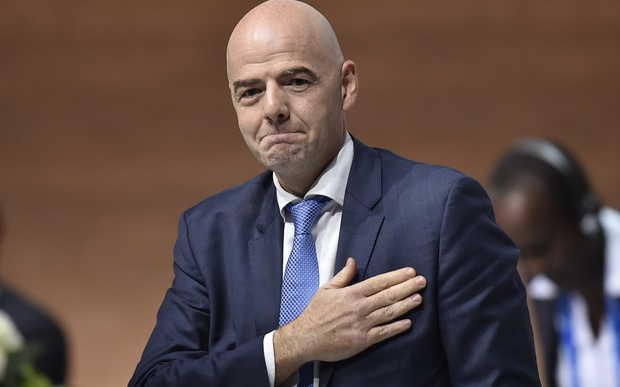 Gianni Infantino reacts after winning the presidential election during the FIFA Congress in Zurich. Photo: AFP

A 45-year-old Swiss-Italian lawyer has been chosen to head the scandal-ridden world football federation.

Swiss-Italian Gianni Infantino has been elected as the new president of FIFA, replacing Sepp Blatter.

New Zealand voted for, who upset expectations to win election at a Fifa congress in Zurich, Switzerland, this morning.

For the past seven years the 45-year-old Swiss-Italian has been the secretary-general of the European football federation Uefa.

Prince Ali bin al-Hussein was third with four votes, while Jerome Champagne failed to get any. Tokyo Sexwale withdrew before voting began.

A simple majority of more than 50 percent - 104 votes - would have been enough for victory.

In the first round, Mr Infantino had managed to secure 88 of the 207 available votes.

New Zealand Football president Deryck Shaw said he talked to each of the five candidates before voting and Mr Infantino's manifesto was most in line with New Zealand's vision for the game.

Mr Infantino said he will work tirelessly to bring football back to Fifa and Fifa back to football.

Mr Blatter, who had led world football's governing body since 1998, stood down last year and was later banned from football for six years.

Mr Infantino is a lawyer from Brig in the Valais region of Switzerland, less than 10km from Mr Blatter's hometown of Visp.

An emotional Mr Infantino told delegates he was finding it hard to "express my feelings in this moment".

But he told delegates that together they would "restore the image of FIFA and the respect of FIFA".

He added: "I want to work with all of you together in order to restore and rebuild a new era of FIFA where we can put again football at the centre of the stage.

"FIFA has gone through sad times, moments of crisis, but those times are over. We need to implement the reform and implement good governance and transparency. We also need to have respect.

"We're going to win back this respect through hard work, commitment and we're going to make sure we can finally focus on this wonderful game."