The BBC repeatedly failed to stop "monstrous" abuse by DJ Jimmy Savile and broadcaster Stuart Hall because of a "culture of fear", a report says. 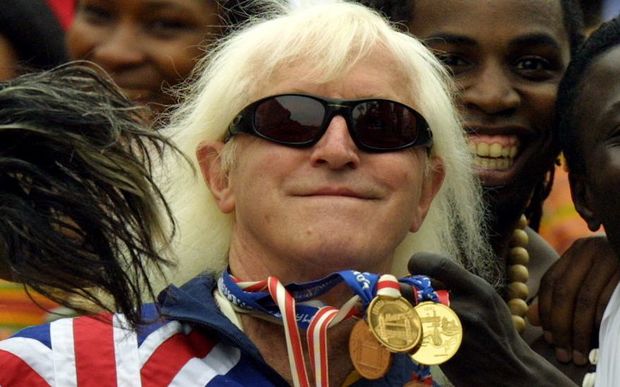 The Dame Janet Smith review identified 72 victims of Savile - including eight who were raped - and 21 victims of Hall, over four decades from the 1960s.

She said BBC culture "was deeply deferential" and staff were reluctant to speak to managers about complaints.

Director general Lord Hall said the BBC had failed to protect the victims.

The review found that senior managers were not told of complaints about Savile because of a culture of fear that still exists in the BBC.

However, a small number of BBC managers in Manchester had been aware of Hall's conduct, it said.

Hall, 86, who presented TV show It's a Knockout, was jailed in 2013 after admitting indecently assaulting 13 girls.

Dame Janet said Savile - who died in 2011, aged 84, without ever facing prosecution - and Hall were "serial sexual predators" and the BBC had missed five opportunities to stop their misconduct.

The report found that Savile would commit sexual assaults "whenever the opportunity arose" and incidents took place "in virtually every one of the BBC premises at which he worked".

His usual tactic with young girls - and in some cases boys - was to groom them by inviting them to watch him perform and then make a sexual approach on them in his dressing room, the report said.

It heard evidence from more than 700 people, including 117 witnesses from the BBC who said they had heard rumours about Savile.

They included two BBC managers who had confronted Savile over claims he took teenagers home from Top of the Pops - claims which Savile admitted, but said he was simply giving the girls a bed for the night because they had no where to stay.

The review cost £6.5m and its report is 1000 pages and three volumes long.

But Liz Dux, a specialist abuse lawyer who represents 168 of Savile's victims, said the report was "disappointing", and many victims would feel it was "nothing more than an expensive whitewash".

She said Dame Janet did not have the power to compel people to give evidence and her clients "will always be left with that feeling - is everything known about? Do we know the full picture?"

The impartial investigation was set up by the BBC in 2012 to look at the corporation's culture and practices during the years it employed Savile - thought to be from 1964 to 2007. It found:

Meanwhile, Lord Hall said DJ Tony Blackburn had "parted company" with the BBC after failing to fully co-operate with the inquiry.

Mr Blackburn, 73, denies the allegation and says he was cleared of wrongdoing. In a statement, he accused the BBC of making him a "scapegoat" and threatened to sue the corporation.

At a news conference to announce the details of the findings into the abuse of Savile and Hall, the director general apologised to their victims and said: "A serial rapist and a predatory sexual abuser both hid in plain sight at the BBC for decades.

"What this terrible episode teaches us is that fame is power, a very strong form of power and like any form of power it must be held to account... and it wasn't."

BBC Trust chairwoman Rona Fairhead said the corporation had "turned a blind eye, where it should have shone a light".

House of Commons leader Chris Grayling said it was "inexplicable" that BBC staff had missed opportunities to stop the abuse.

Referring to Savile and Hall, Dame Janet said: "Both of these men used their fame and positions as BBC celebrities to abuse the vulnerable.

"They must be condemned for their monstrous behaviour."

Dame Janet said there had been a "culture of separation, competition and even hostility between different parts of the BBC, so that concerns arising in one part would not be discussed with others".

"Staff were reluctant to speak out to their managers because they felt it was not their place to do so," she said.

She said celebrities were "treated with kid gloves and were virtually untouchable".

Former BBC presenter Savile exploited his celebrity status to abuse hundreds of adults and children across the country, assaulting or raping them in television dressing rooms, hospitals, schools, children's homes and his caravan.