The UN has carried out its first air drop of aid in Syria to help civilians in an eastern city besieged by Islamic State (IS) militants. 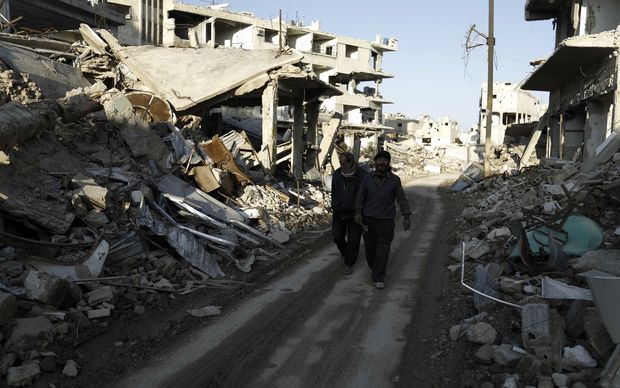 Syrian men walk along a street damaged by shelling in the neighbourhood of Jobar, on the eastern outskirts of the capital Damascus. Photo: AFP

The UN says 200,000 civilians are living under siege in Deir al-Zour.

In a recent report, the UN said those trapped in the besieged areas were facing "sharply deteriorating conditions" with reports of "severe cases of malnutrition and deaths due to starvation".

He said teams from the Syrian Arab Red Crescent on the ground confirmed that "pallets have landed in the target area as planned".

The World Food Programme had previously ruled out humanitarian air drops in Syria due to the complexities of obtaining use of airspace, organising distribution on the ground, and finding suitable drop zones.

The UK government also said air drops were "high risk and should only be considered as a last resort when all other means have failed".

But Jan Egeland, who chairs a humanitarian taskforce, said last week that the strategy was the only way to feed people in Deir al-Zour. 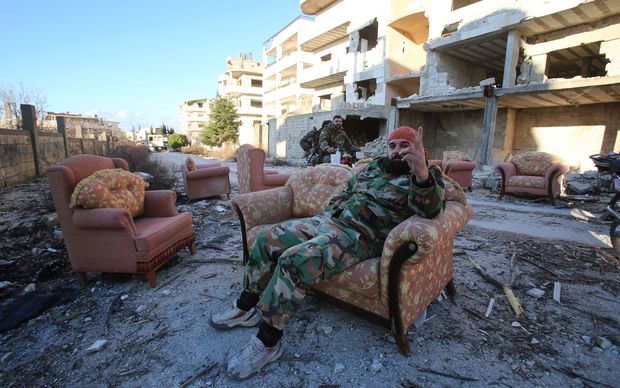 A member of the Syrian pro-government forces sits on a sofa in the strategic town of Salma. Photo: AFP

The UN estimates that more than 480,000 Syrians are living in besieged areas, with four million more people in "hard-to-reach" areas.

The supplies are expected to last for about a month.

All sides in the civil war are believed to have used siege warfare, in which forces surround an area and cut off essential supplies, in breach of international law.

A temporary "cessation of hostilities" is scheduled to take effect across Syria on Saturday after midnight Damascus time (22:00 GMT Friday).

It excludes IS and the al-Qaeda-linked Nusra Front.

The Syrian government has said it will observe the partial ceasefire, but insists it will continue to fight IS, al-Nusra and "other terrorist groups linked to them".