The remote Yasawa Island group was hit by the full force of Cyclone Winston.

The storm system went through at 22km per hour - which is the only consolation these people have, because a slower cyclone would have caused far more damage.

The manager of the nearby luxury Turtle Island Resort, Alexander Weiss, has been co-ordinating the damage assessment out here.

Mr Weiss said, with Vodafone and Digicel down, the only way to get in touch was to send boats. Even the radio contact has been out. 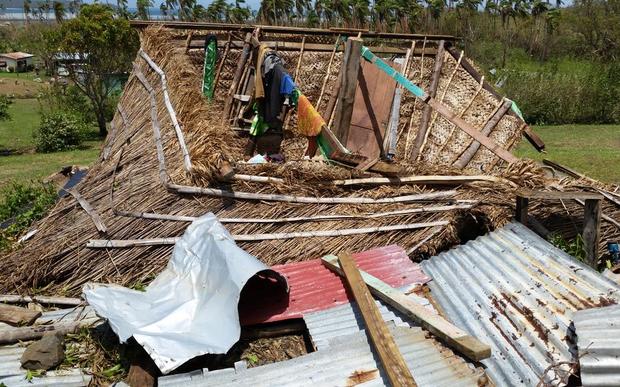 He sent one of his workers from Matacawalevu Village, Arthur Sladden, to visit all the nearby villages and collect information on what each settlement needed.

Mr Sladden said 120 families lived in 92 houses in Yaqeta. Eight houses were flattened, and 77 bathrooms and toilets were damaged.

Compounding that, most of the cassava and breadfruit crops were gone.

At Vuaki Village, I stood at the presbytery building at the parish of St Patrick on the top of the hill.

The toilet and shower room had almost blown right off, its roof was missing - and the house itself had torn away from the concrete stairway. A local man told me that if the cyclone had lingered for another hour the house would have gone completely.

A broken school - and water tanks

Down the hill at Nasomolevu District School, a whole classroom lay in ruins on the beach. It used to sit 60m up the hill. All that was left up there was a concrete slab. The wood, louvre windows, and frames and sheets of corrugated iron were strewn through the trees down the hillside.

Ricky Christopher Lesi is the head teacher. He put on a brave face at first but, as we started to talk, he became emotional and described how he thought about the school children.

"I was in a state of loss, because I was thinking of my children. The students, who will come the following day and see their property, the books, they've been flying elsewhere. So I was pretty much looking forward to meeting them to console them."

Trees have been thrown into the toilet block as well and there has been damage to essential goods such as water tanks.

Mr Lesi took me to a large water tank, which had a big crack at the bottom. As long as they had good tanks, he said, there should be enough rain to fill them - but they needed at least three as soon as possible.

"And we, very much unfortunate to see that this is damaged because we rely on this for our basic necessity of water."

Education Minister Mahendra Reddy has cancelled school classes for a week, but Mr Lesi said it would take longer in Vuaki to get the materials together to start teaching again.

The teachers' quarters were damaged as well. The school library, built in 2010 by the Nairana Study Centre from Sydney, however, was still standing tall. 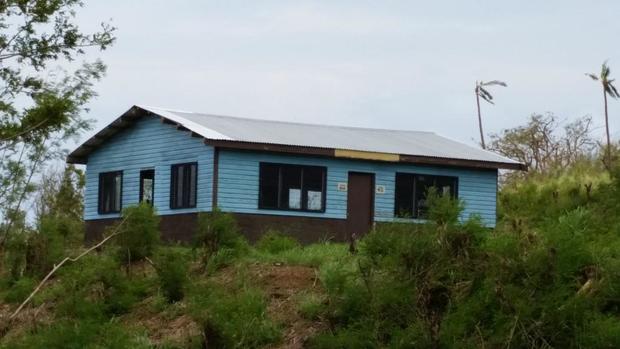 The school library in Vuaki, built by the Nairana Study Centre in 2010, is still standing after Cyclone Winston. Photo: RNZ / Alex Perrottet

The house of Tui, Lowata and their six children was also still standing. The Education Sponsorship Trust from New Zealand built it in 2014 and 2015, and the team should be happy to know it survived a category five cyclone.

Lowata brought her whole family there and, though they were wet, they were safe.

"The cyclone started here at 7 o'clock, up to 2 o'clock in the morning. We just stayed here, the water came inside the house and we still in our house." 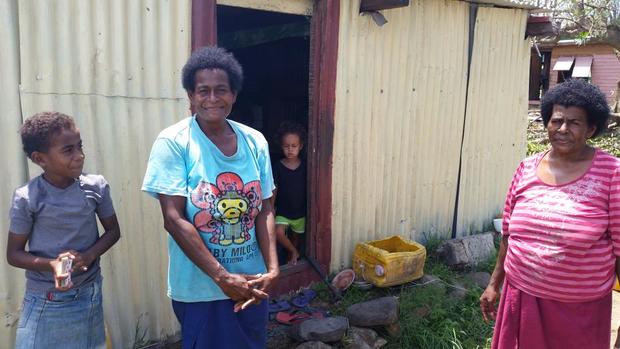 But the outdoor kitchen had disappeared and there were trees lying around among the old tin.

Vuaki mayor Etuate Ratudradra sat down with Mr Sladden to account for all the damage.

He said, in all, 17 buildings lost their roofs and 12 families were homeless. 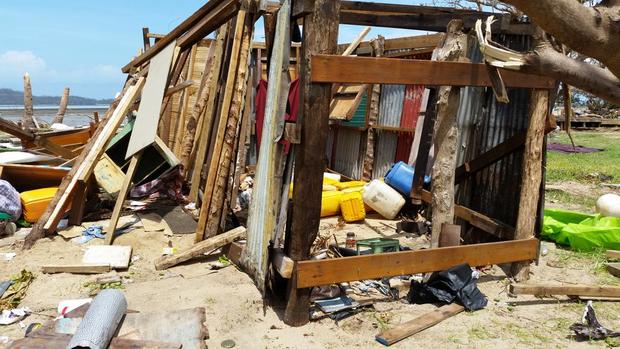 Many of those living in more basic houses sought shelter with friends and family during the storm. Photo: RNZ / Alex Perrottet

"So the school and the church compound, like the priest house are particularly damaged. The roof has half been taken away ... All the plantation are gone, like yams, cassava and plus the crops."

There are 340 villagers here, and those 12 families will be well looked after.

Fijians are resilient. They are all smiles. I asked the little children on the beach how the cyclone was, and some said "good", while their mother laughed, a concerned look on her face.

No one was badly injured in Vuaki, or Matacawalevu or Yaqeta. Village leaders ensured all were looked after, and those with flimsy houses were sheltered elsewhere.

Lewa Ravato is expecting her fourth child. She and her siblings have jobs at the nearby Nanuya Island Resort and Turtle Island Resort.

Her father, Emosi, used to work there and built the traditional bure shelters on the beach of Nanuya. He also used to play in the ukulele band in the evenings, and now most of his children, down to the youngest, Pere, also play and do other jobs.

But the ukuleles are not playing at the moment.

Ms Ravato said her mother, Laite, was sick, and she needed to see a doctor - and the closest medical centre was on Nacula Island, a 20 minute boat ride away.

She said her father was there collecting medicine, and she thought her mother was suffering from a combination of fatigue and possibly drinking contaminated water.

"She feels weak, I think from from running around, because they have to go to another house when the wind was very strong.

"They can't stay here because the roofing iron was sloping, and the water was coming inside the house. So they have to move to my house when the wind was very strong." 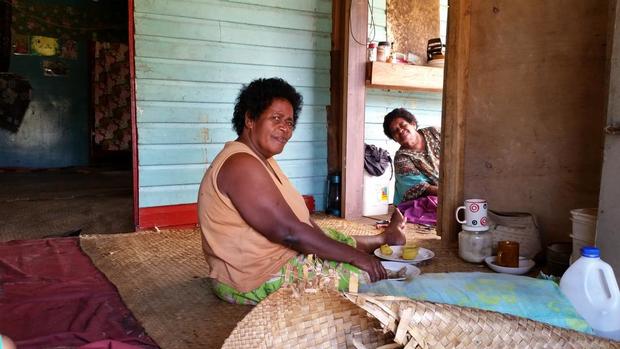 Laite Ravato is waiting for treatment, after hurting her back in the cyclone and potentially drinking contaminated water. Photo: RNZ / Alex Perrottet

The Ravato family live close to the beach, away from the main group of houses of Vuaki, which are on higher ground. There are two old traditional bures, and both were knocked over, with clothes strewn over the ground among the wreck.

But Lewa could smile, even laugh at a silly joke. She knew live would improve and they would rebuild. There would be new life. She was expecting her fourth child. 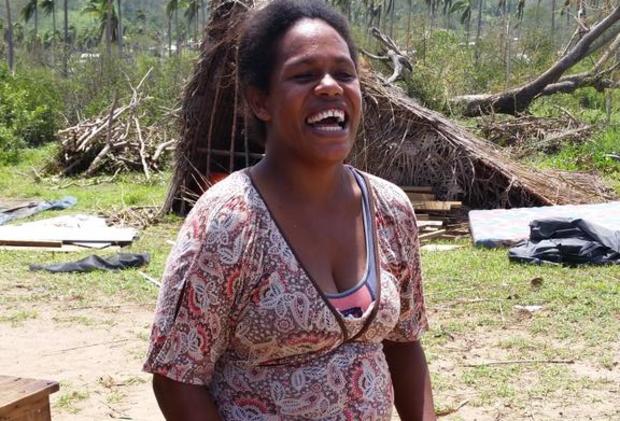 She was grateful to the resorts, she said. Apart from providing employment, they had co-ordinated the damage assessment and allocated thousands of Fiji dollars upfront for the initial recovery.

Back at Turtle Island, Alexander Weiss said help was on its way.

"With a storm like this, they are losing hugely all their crops. That means we always do a disaster management assistance, with flour, rice, the most essential products which they need in order to survive the times right now."

The couples visiting the resort had an interesting experience, he said.

"We had seven couples on the island during the storm, which were all in my personal home here on the island, and we were all gathered together and had some kava and enjoyed the time together.

"It was very important for us to have everyone in the same spot in order to know if everybody is in good health.

"If we would have had them in the individual bures and they would have had an injury during the storm, then it would have been impossible to address, so that's why we got everyone together." 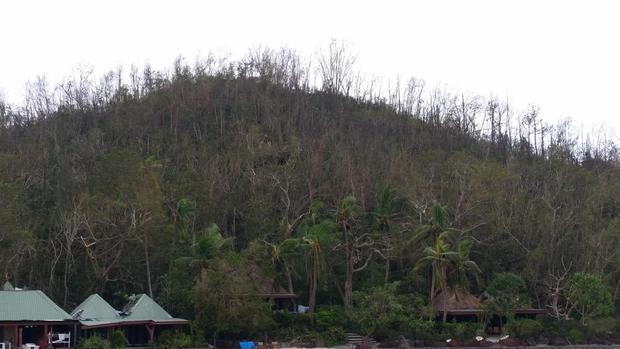 Mr Weiss said the resort was still operational. Although they could have left on the sea plane, six couples had chosen to stay, despite trees strewn in front of their villas and bures.

But the waters of the blue lagoon were still blue, and there was a peacefulness here after the storm.

And the tourists, just like me, were still taking in the attitude of the local Fijians.

The good humour, the quiet resolve, and the broad smiles of the people of the Yasawas is all part of the peacefulness. Unlike the fickle weather, their cheer is a remarkable constant. 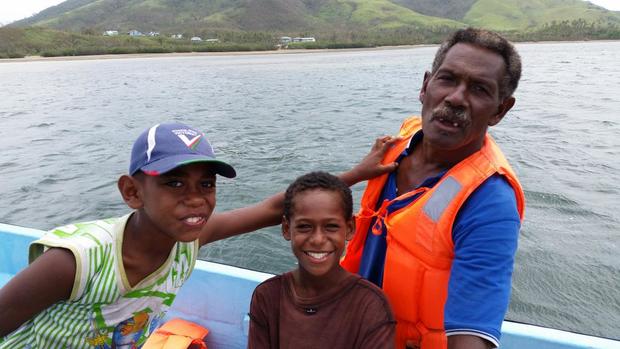 Over 100 of them were at the resort, chainsawing trees, cutting up broken roofing, and all the while cracking jokes and getting on with their lives. 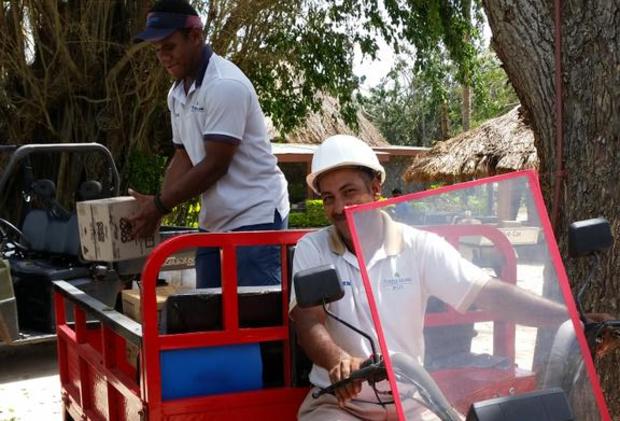 Over 100 village men have been employed to clean up Turtle Island Resort. Photo: RNZ / Alex Perrottet

Yes, it was the biggest cyclone to hit Fiji - and to hit the Pacific. Yes, there are deaths, and there are likely to be more.

Those here in the Yasawas hadn't heard of any deaths. They were shocked and saddened when I told them and they went quiet for a good while.

Perhaps they were praying.

But Cyclone Winston hasn't dented their morale. This is the rhythm of life in the Pacific. Fishermen will still be able to fish, and builders will be soon getting to work.

But they will need materials, and more help than just the generosity of these close resorts.

For the farmers, it's grim. They need this employment at the resorts desperately, because for the next few months, there will be no produce from their plantations and crops.

The whole landscape itself needs time to recover.

Fiji will grow back again. Slowly.