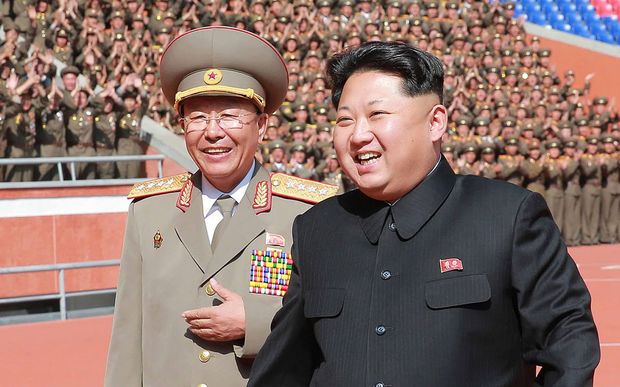 Senior officials in North Korea have previously been absent from view for long periods only to reappear.

However, Gen Ri would be the latest of several high-ranking officials to be purged under leader Kim Jong-un.

South Korean media reported that Gen Ri had been executed earlier this month for corruption and "factional conspiracy".

Last week, a meeting of the Central Committee of the ruling Workers' Party attended by Mr Kim discussed how to deal with corruption.

While no individuals were mentioned, state news agency KCNA reported at the time that those at the meeting criticised "the practices of seeking privileges, misuse of authority... and bureaucratism manifested in the party".

However, "when previous chiefs of staff have been removed, they have re-appeared in other positions or been demoted. The only exception was Gen Ri Yong-ho who was removed in 2012 and then put under house arrest," Mr Madden said.

"That being said, much of the information that South Korean intelligence sources have been giving to the media in the past year or so has turned out to be true," he added.

Mr Madden also pointed out that it already seemed as though Gen Ri had been replaced when another general, Ri Myong-su, appeared at a recent rally in Pyongyang and was mentioned in the slot normally reserved for the chief of staff.

If this is the case, he will be the fourth chief of staff since Kim Jong-un took over in 2011, as opposed to three during his father Kim Jong-il's 17 years in power.

The reports of Gen Ri's execution come days after the North launched a long-range rocket, which critics say is a test of banned missile technology.

In January the North carried out its fourth nuclear test.

Some observers say the regime's recent behaviour may be linked to Kim Jong-un wanting to shore up his position ahead of a rare congress of the Workers' Party due in May.

In May 2015 South Korea's spy agency told parliament that the North's Defence Minister Hyon Yong-chol had been executed for showing disloyalty to Mr Kim.

The agency said Mr Hyon was killed by anti-aircraft fire in front of an audience of hundreds - it later said it was yet to verify the information. That news came weeks after the reported execution of 15 senior officials.

Seoul said all operations at the complex would halt, to stop the North using its investment "to fund its nuclear and missile development".

The suspension will mean North Korea will lose the income it currently gains from the site, which comes to $US100m a year.