A signal controller is at the heart of the German investigation into a Bavarian train disaster which claimed 10 lives, media reports say. 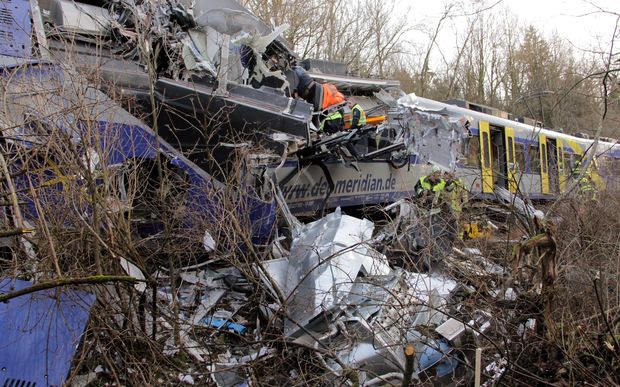 Firefighters and emergency doctors work at the site where two German commuter trains slammed into each other head on. Photo: AFP

German police have so far rejected as speculation the reports that the controller turned off an automatic safety system shortly before the crash.

But unnamed sources have told German media that a human signalling error may have led to the two passenger trains colliding on a single track on Tuesday.

The trains crashed head-on while both were travelling at about 100km/h east of Bad Aibling, a spa town about 60km south-east of Munich.

A teenage girl as well as both train drivers and two train guards were among those killed.

Investigators will have to find out why a train that left Holzkirchen travelling east to Rosenheim was on the single track at 06:48, four minutes after it was due to reach its next stop at Kolbermoor, where it would have met the westbound train on a double track.

The westbound train from Rosenheim to Holzkirchen would have left Kolbermoor at 06:45 and would have been expected to be on the single track at the time of the accident.

The controller's role was initially highlighted by newspaper group RedaktionsNetzwerk Deutschland (RND), which quoted sources suggesting the safety system had been switched off to allow the eastbound train through on the single track line because it was several minutes late.

That would also have made the automatic braking system inactive. That braking system, known as PZB, is supposed to kick in when a train runs through a red light and was installed after a 2011 disaster at Magdeburg in which 10 people died. 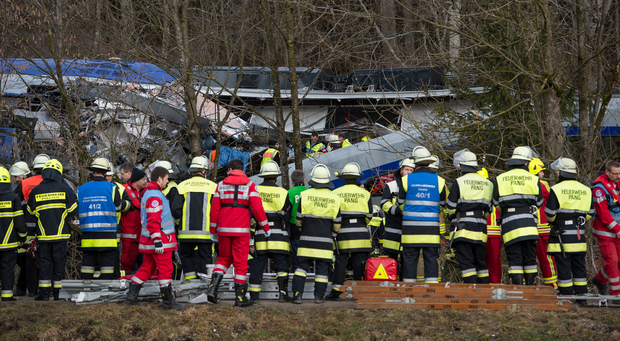 Firefighters and emergency doctors work at the site of a train accident near Bad Aibling, southern Germany, on February 9, 2016. Photo: AFP

Sueddeutsche Zeitung, citing a well-informed source, alleged that when the signal controller had realised his mistake it was too late.

A police spokesman rejected the theory as "pure speculation".

"Discard that, we reject that," a spokesman told local broadcaster Bayerischer Rundfunk.

Police said the controller had been questioned on Tuesday as part of the inquiry but insisted there was no immediate suspicion towards him.

However, as the investigation was in its early stages, nothing could be ruled out. It has also emerged that the automatic system was tested last week.

Investigators have so far found two "black box" data recorders and are looking for a third.

Transport Minister Alexander Dobrindt told reporters on Wednesday that the first black box had already been analysed. No technical fault or evidence of driver error had been found on the westbound train, he said.

But the eastbound train's data recorder may be of more importance, as it was travelling late when the two trains crashed head-on.

Police said on Wednesday that the search for victims in the wreckage had been completed. None of those being treated in hospital was in a life-threatening condition, they added.

The trains collided in a hilly and densely wooded region near the Mangfall river, and the difficult terrain made the rescue operation difficult.

A 160-tonne crane arrived at the scene of the disaster on Wednesday, as salvage workers prepared to remove the two mangled trains from the track. The work was expected to last at least two days.