Two passenger trains have collided in the German state of Bavaria, with police saying at least nine people have been killed and scores injured. 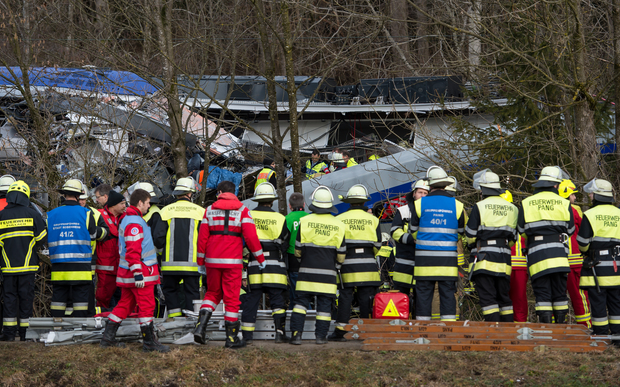 Firefighters and emergency doctors work at the site of the train crash. Photo: AFP

The head-on crash happened on Tuesday near Bad Aibling, a spa town about 60km south-east of Munich.

The trains' operator said both had partially derailed and were wedged into each other. Carriages were overturned. 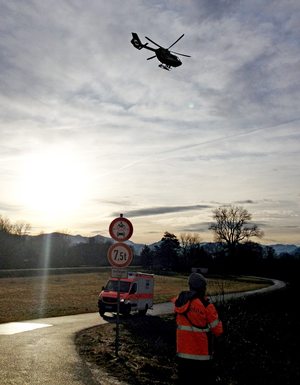 A rescue helicopter flies to the site of the crash. Photo: AFP

Emergency teams, some winched in by helicopter, worked for hours to free casualties from the wreckage.

Regional police said in a tweet (in German) that nine people had been killed and 100 injured, 50 of them seriously.

The drivers of both trains and two train guards were among those killed, police said.

"This is the biggest accident we have had in years in this region and we have many emergency doctors, ambulances and helicopters on the scene," another police spokesman, Stefan Sonntag, told the Associated Press.

Regional train company Meridian said in a statement that "a tragic accident" had occurred on a single-track route between Rosenheim and Holzkirchen at about 7am local time (7pm NZT).

Bernd Rosenbach, the managing director of Bayerische Oberlandbahn, which operates Meridian's trains, told reporters: "The accident is a huge shock for us. We are doing everything we can to help the travellers, relatives and workers."

Technical manager Fabian Amini added: "Our thanks go to the emergency services and workers who gave their help so quickly."