The drug company boss who raised the price of a lifesaving medicine by 5000 percent laughed as he refused to answer questions from at a US congressional hearing. 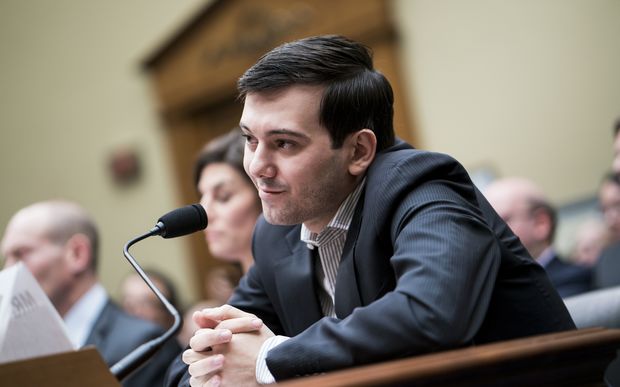 Former Turing Pharmaceuticals chief executive Martin Shkreli invoked his Fifth Amendment right against self-incrimination and declined to answer questions from US politicians interested in why he raised the price.

Shkreli, 32, sparked outrage last year among patients, medical societies and Democratic presidential front-runner Hillary Clinton after Turing raised the price of a 62-year-old HIV drug called Daraprim from US$13.50 to US$750 a pill.

Moments after refusing to testify, Shkreli then called members of the US Congress "imbeciles" on Twitter.

"Hard to accept that these imbeciles represent the people in our government," Shkreli wrote.

Shkreli was arrested in December and charged with running his investment funds and companies almost like a Ponzi scheme.

He has pleaded not guilty, stepped down from Turing and was fired from KaloBios Pharmaceuticals.

At the congressional hearing, Shkreli sat at a table with arms crossed, repeatedly laughing at and declining to answer questions about the effects of the price hike on patients.

"I intend to follow the advice of my counsel, not yours," Shkreli told Representative Trey Gowdy, a South Carolina Republican.

The Fifth Amendment of the US Constitution says no person shall be compelled in any criminal case "to be a witness against himself".

US Representative Elijah Cummings reprimanded Shkreli for appearing to laugh during the Maryland Democrat's opening statement.

Wearing a sports jacket and collared shirt, Shkreli responded to questions by continuing to laugh, twirling a pencil and yawning.

Mr Cummings added a few minutes later: "You can go down as the poster boy for greedy drug company executives, or you can change the system."

Shkreli was allowed to leave the hearing early after he repeated that he would not answer any questions at all.

Representative John Mica, a Florida Republican, said he would consider asking fellow politicians to hold Shkreli in contempt for his behaviour.

"I don't think I've ever seen the committee treated with such contempt," Mr Mica said.

His appearance prompted outrage from members of Congress.

Democratic presidential candidate Bernie Sanders tweeted: "The American people are fed up with the blatant profiteering of pharmaceutical company CEOs like Martin Shkreli. It must end."

The Federal Trade Commission and the New York attorney-general are investigating Turing for possible antitrust violations.