Pharmaceutical enterpreneur Martin Shkreli, who sparked outrage by ordering steep hikes in prescription drug prices, has been arrested by the FBI. 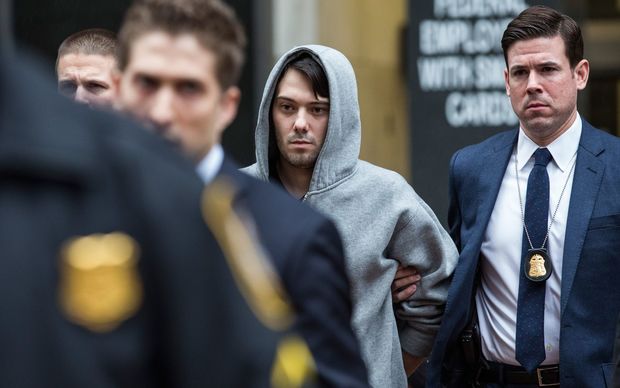 The charges relate to his time at a drug company he previously headed, Retrophin Inc., and a hedge fund, MSMB Capital Management, where he was a fund manager.

He sparked controvery earlier this year when his current drug company Turing bought an established drug used to treat a dangerous parasitic infection and raised the price from $13.50 to $750. The medicine had long been available as a generic drug used to treat toxoplasmosis in AIDS patients.

The outcry over Daraprim turned the drug company entrepreneur into a pariah on the internet, where he persistently provoked his critics on Twitter.

In recent days, he has said that journalists do not "matter" and asked about a Democratic presidential candidate, "If @BernieSanders was a parasite what would he be?"

Sanders, who advocates a single payer healthcare system to control drug prices, has refused to accept a donation from Mr Shkreli, instead giving the money to a health clinic in Washington, D.C.

Shkreli also called himself "the world's most eligible bachelor" and boasted about buying the only copy of a Wu-Tang Clan album for $2 million. Robert Diggs, the rap group's producer, later gave away most of the proceeds in protest at Mr Shkreli's business practices.

50-100 date solicitations a day for me, the world's most eligible bachelor. Sorry, but you have to be a shareholder to meet me.

On Twitter, the top hashtag and keyword related to the arrest was #Karma, with many saying on social media that the drug company executive was getting what he deserved.

The charges relate to his management of New York-based hedge fund MSMB Capital Management, whose closure he announced in 2012, and his time as CEO of Retrophin from 2012 to 2014.

The indictment said Mr Shkreli made false representations to MSMB investors to draw in $US 3 million in investments.

After MSMB suffered devastating trading losses in 2011 and ceased trading, Mr Shkreli for months sent fabricated updates to investors touting profits of as high as 40 percent since inception, the indictment said.

He also solicited $US5 million from investors for another fund, MSMB Healthcare Management LP, while concealing his performance managing MSMB Capital and a prior fund and providing investors an inflated valuation of his then-private firm Retrophin, the indictment said.

To pay back the MSMB funds' investors, Mr Shkreli and lawyer Evan Greebel misappropriated $11 million in Retrophin assets through settlement agreements and sham consulting deals, according to the indictment.

The case mirrors a lawsuit Retrophin filed in August against Mr Shkreli in federal court in Manhattan for $US65 million, claiming he had used his control over the company to enrich himself and pay off MSMB investors' claims.

Shkreli has denied the allegations.

It is unclear how the case and other continuing investigations could affect Turing or KaloBios.

At least two separate Congressional probes have been launched since September on the pricing issues of Daraprim.

Turing is also under investigation by the New York state attorney general for antitrust concerns.

At a Senate hearing on drug pricing last week, a doctor who treats babies with life-threatening toxoplasmosis testified that a course of treatment with Daraprim went from about $US1200 to no less than $US69,000.