A UN panel will conclude Wikileaks founder Julian Assange is being "arbitrarily detained" in the UK, the Swedish foreign ministry has said. 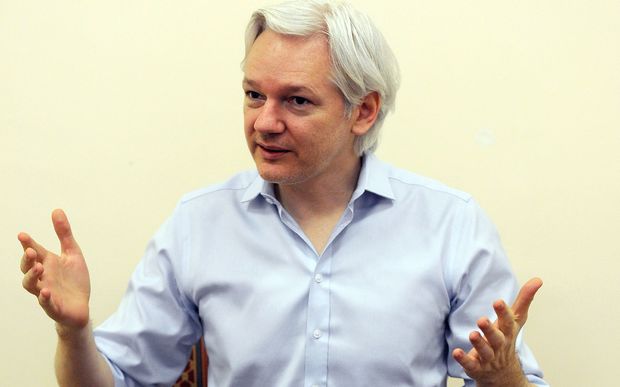 Mr Assange claimed asylum in London's Ecuadorean embassy in 2012. He wants to avoid extradition to Sweden over a rape claim, which he denies.

The Met Police will arrest him if he leaves the embassy.

Swedish prosecutors said the UN panel's decision would have "no formal impact" on its ongoing investigation.

Mr Assange earlier said his passport should be returned and his arrest warrant dropped if the UN panel ruled in his favour.

He was originally arrested in London in 2010 under a European Arrest Warrant issued by Sweden.

Mr Assange, who is Australian, claimed asylum inside the Ecuadorean embassy in Knightsbridge after the UK Supreme Court ruled the extradition against him could go ahead.

In 2014, Mr Assange complained to the UN that he was being "arbitrarily detained" as he could not leave the embassy without being arrested.

The application claimed Mr Assange had been "deprived of his liberty in an arbitrary manner for an unacceptable length of time".

The UN's Working Group on Arbitrary Detention is due to announce the findings of its investigation on Friday.

Wikileaks earlier tweeted it was waiting for "official confirmation" of the UN panel's decision.

Downing Street said the panel's ruling would not be legally binding in the UK while a European Arrest Warrant remained in place.

"We have been consistently clear that Mr Assange has never been arbitrarily detained by the UK but is, in fact, voluntarily avoiding lawful arrest by choosing to remain in the Ecuadorean embassy," he added.

"The UK continues to have a legal obligation to extradite Mr Assange to Sweden."

The Swedish foreign ministry said in a statement that it noted the UN panel's decision "differs from that of the Swedish authorities".

The statement added the legal process for Mr Assange's case would be handled in court by Swedish prosecutors.

Per Samuelsson, Mr Assange's lawyer, said Swedish authorities would be "morally" wrong to continue the investigation if the UN panel found in his favour.

"The ball is in Sweden's yard, in the prosecutor's yard. She is not formally bound by the decision by the UN, but morally it is very difficult to go against it."

Journalist John Pilger, a friend of Mr Assange, said "the ball is now at the feet of the British government", whose international legal "obligations" were represented by the UN panel.

"They did something in terms of supporting the tribunal in all the other celebrated cases, and Assange now joins them because the UN jurists have clearly found this is a case of arbitrary detention," he said.

Mr Assange's Wikileaks organisation posted secret American government documents on the internet, and he says he believes Washington will seek his transfer to the US if he is sent to Sweden.

In the statement, published earlier by Wikileaks on Twitter, Mr Assange said: "Should the UN announce tomorrow that I have lost my case against the United Kingdom and Sweden I shall exit the embassy at noon on Friday to accept arrest by British police as there is no meaningful prospect of further appeal.

"However, should I prevail and the state parties be found to have acted unlawfully, I expect the immediate return of my passport and the termination of further attempts to arrest me."

Last October, Scotland Yard said it would no longer station officers outside the Ecuador embassy following an operation which it said had cost £12.6m (NZ$27.3m). But it said "a number of overt and covert tactics to arrest him" would still be deployed.