Julian Assange, the founder of the international whistle-blowing website WikiLeaks, told Nine to Noon this morning that he does not know when he can leave the Ecuadorian Embassy without fearing arrest.

He has been there for almost five years, with almost constant police surveillance, at a cost of £GBP12 million to the British taxpayer. 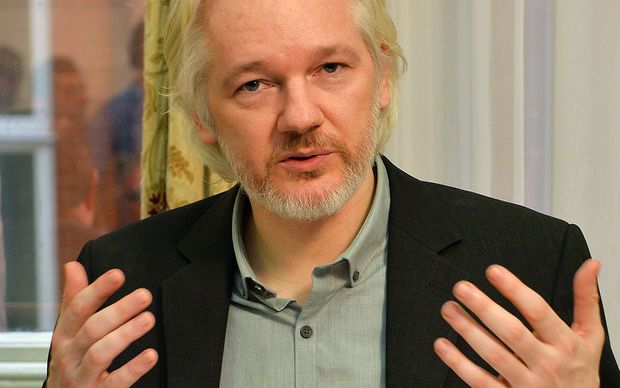 "I have been detained in the UK without charge for five years," he told Radio New Zealand's Nine to Noon.

The charges filed against him are complex: he said there were no longer any charges in Sweden, but that he was likely to be arrested by British forces as soon as he left the building.

"The British say they'll arrest me regardless of what's happening in Sweden," he said.

"There is only one finding in that case and that finding is not only that I'm innocent but that no crime has been committed. The woman herself says that she was not raped and the police made it up, and that's in the police documentation."

That police documenation is not widely available. However, in August 2015, Sweden said it was dropping its investigation into sexual assault allegations because of the statutes of limitations, though he still faces the more serious allegation of rape, which expires in 2020.

Swedish prosecutors have refused to go to London to interview Assange, adamant that he should be present in Sweden for the next stage of proceedings.

But he said that the time limit had no bearing on the case, and that the UK did not care about the specifics of the Swedish allegations.

"The reality is the UK has said regardless of what that case is about, they will arrest me anyway.

"The US has said in federal court that there is a national security prosecution pending against me [with charges including] espionage, conspiracy, computer hacking, and conversion."

He said the UK would not confirm whether it had received a formal extradition notice from the United States, but questioned the legality of such a bill.

"I'm not an American. It's a violation of international laws for the US to be projecting its laws onto an Australian citizen in Europe," he said.

Though it is not known whether the US has called for him to be extradited, US Attorney General Eric Holder has previously said American officials were pursuing a "very serious criminal investigation" into the matter.

Assange fears the death penalty in the US, though legal experts have said that it may be difficult for the US to prosecute him as US criminal statutes and case law do not cleanly apply to his case.

Cloistered in the embassy, Assange has had a number of projects to occupy his time, including a recently released book,The WikiLeaks Files, which has collated and analysed the historic importance of some of the leaked cables.

The book, which does not feature the opinions of any of WikiLeaks many critics, takes views from 17 experts across the world, the majority of which are American.

"There is a wide range of views, and I think you can see that from reading the book," Assange said.

"New Zealand does, briefly, [appear] in the Asia-Pacific section, but I suppose more importantly, several things that NZ is involved with, such as the TPP, and the broader constellation [including] the International Criminal Court [ICC]," he said.

He alleged that US persuaded countries to interfere with the ICC, where ordinarily charges "are brought against people for crimes against humanity, and they're investigated or prosecuted, or not."

"It's very interesting to look at the International Criminal Court as a way the US engages with the rest of the world. [...] We document the US going to other countries in the world and trying to sign secret bilateral agreements."

The book draws upon an archive of US cables, showcasing "internal state literature about how the only modern empire that we have actually behaves. It touches on the internal dynamics of every country as well."

Assange said ordinarily these would be topics for academic or the news media, but said that there was seldom a market for more complex, structural analysis of regions and trends in journalism.

He suggested that legal fears might be at the centre of why American academia had not touched upon it.

"This is a more detailed approach, and something academia should be doing," he said.

Assange said that his own charges, and those of other whistleblowers, had not prevented other people from coming forward and contributing to the bank of information.

"We've published more than 5 million documents while I've been in here - very serious material. In fact, most of the chapters of the TPP that have been revealed [have been through WikiLeaks].

"Authority comes from a power, but the legitimacy - when an authority acts in a hypocritical way, doesn't act in a just way, its effective authority is reduced [...] and that does make others come forward."

"WikiLeaks is two things: one, we deal with whistleblowers, we protect them and we create new stories about how the world works, and two, it's a very serious library that is used in court cases all over the world, and a number of other forums, academic publications and so on.

"There have been many cases where innocent people have been released from prison as a result of what we have done."

He said allegations that innocent people had been harmed by the leaks were unfounded.

"The Pentagon put [that] about, after we revealed the details of more then 200,000 casualties they had been involved with [...] they then tried to change the topic by trying to attack the media - in that case, us.

"They had to say, under oath, that they could not find a single case where someone had come to harm."

He said in some cases the leaks had changed election results and helped innocent people receive compensation, but these were not its primary aims.

"It is enough that it is a state library where people can see how the world works and they can be confident that it comes not from opinion but from state archives, which are pristine."

"I arranged Edward Snowden's asylum in Russia. It was very difficult to do, because we put in 21 asylum requests to countries across Western Europe. [...] Russia did, and that was the right thing."

He rubbished claims that Snowden was anxious to return to the US, saying this was part of the US's propaganda and an attempt to deter future whistleblowers.

"The US government tries to play that up to act as a deterrant to whistleblowers. Moscow is the largest city in Eastern Europe - it's not exactly the Balkans [...] His family does come over to visit."

How long is he likely to remain in political asylum within the embassy? It's unclear, said Assange, though ultimately it was a matter of politics - and politics in the UK was moving very swiftly.

"My fate is up in the air, in the same way quite a number of other people's fates are up in the air, for example Chelsea Manning [...] or Jeremy Hammond."

Assange does not believe his home country will risk getting involved with his case.

"Australia is famous for abandoning Australian citizens generally who are involved in any kind of political conflict," he said.

In 2010, then-Prime Minister Julia Gillard said his actions were "illegal", though the Australian Federal Police released a statement two weeks later saying that he had not committed any crime in Australia.

At the time, Ms Gillard said, "Obviously, as an Australian citizen, Mr Assange is entitled to the consular assistance we provide to Australians citizens around the world when they find themselves in legal circumstances."

However, Assange told an Australian breakfast show last week that he had had no contact with the Australian consulate for years, and when he had done, they said, "What do you want?".

He was reluctant to talk either about how he hoped he was seen - as a rebel, a hero, or a trailblazer - or how he hoped to be remembered.

"I think it's important that you get things done during the time that you have, and, after that, that you have warm, loving relationships with the people around you. These are the things that are important."