European Council president Donald Tusk has left a meeting with British Prime Minister David Cameron declaring there is "no deal" yet over a renegotiation of the UK's relationship with the EU. 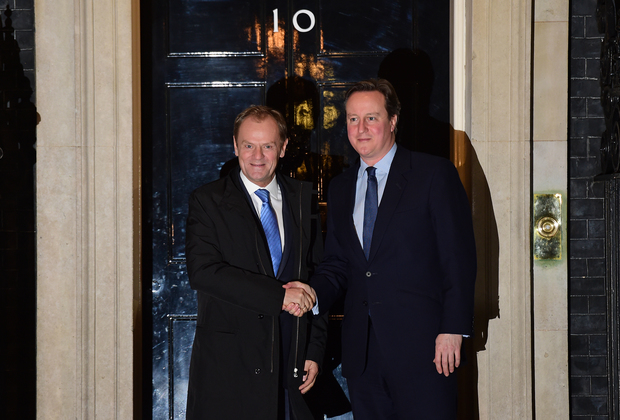 It had been planned that any proposed deal could be put to other EU leaders on Monday, before a February summit.

An early deal would allow Mr Cameron to call a referendum on the UK's EU membership before the summer holidays.

Mr Cameron and Mr Tusk met over dinner at Downing Street on Sunday.

However, Mr Cameron later said on Twitter it had been a "good meeting" and Mr Tusk had agreed to another 24 hours of talks before publishing the draft UK renegotiation text.

According to an EU source, Mr Tusk's negotiating team stayed in Downing Street after the meeting. After the 24-hour period has passed, the team would assess the situation and decide whether to table a draft agreement or not.

The pair hope to finalise a package of measures for the EU leaders' summit on 18 and 19 February.

As part of his attempts to renegotiate the UK's membership of the EU, Mr Cameron had proposed denying in-work benefits to all EU migrants until they had been in the UK for four years.

He said stopping those migrants from claiming tax credits - income supplements paid to those in low-paid work - would reduce high levels of immigration to the UK.

Mr Cameron is now seeking assurances an alternative proposed "emergency brake" on welfare payments to EU migrants could be triggered immediately after the referendum, in a bid to reassure critics it would be effective in slowing the influx of foreign workers.

EU officials have suggested the UK could use the brake for up to four years, but would have to prove public services were under excessive strain.

Under current plans, it could be imposed within three months of the UK applying, if other EU states agreed.

A spokesman for the prime minister said Mr Cameron and Mr Tusk had had a "productive working dinner", adding "progress has been made in the past 48 hours, but we are not there yet".

He also said the European Commission had tabled a text saying the UK met the criteria for triggering an emergency brake on the payment of in-work benefits to EU migrants, describing this development as a "significant breakthrough".

This meant Mr Cameron could deliver on his commitment to restrict in-work benefits to migrants for four years, he added.

But the spokesman acknowledged there were other areas where there was more work to do.

According to BBC political correspondent Carole Walker, Mr Cameron and Mr Tusk agreed it was worth taking more time to try to resolve these areas, which included "economic governance" and "tackling the abuse of free movement".

She added the "draft text we were expecting on Monday won't be circulated until Tuesday at the earliest".