Up to 100 masked men, dressed in black, have gathered in central Stockholm to attack people from immigrant backgrounds, reports say. 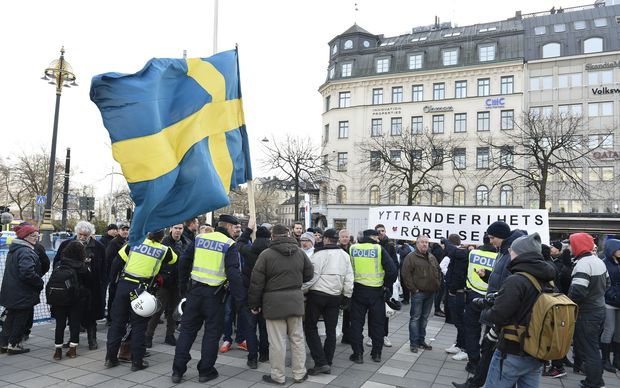 Police talk to participants of a movement calling itself "The People's Demonstration". Dozens of masked men believed to belong to neo-Nazi gangs carried out assaults on migrants in Stockholm overnight. Photo: AFP

Witnesses said the men physically attacked people they believed were foreigners. However, police have not confirmed these reports.

It comes amid heightened tension in Sweden over the migrant crisis.

Some 163,000 migrants applied for asylum in Sweden in 2015, the highest per capita number in Europe.

According to Aftonbladet newspaper, the men in Stockholm were distributing leaflets on Friday evening with the slogan "It's enough now!".

The material threatened to give "the North African street children who are roaming around" the "punishment they deserve."

The newspaper published a video showing the gang clashing with police at Stockholm's central station.

One man was arrested after punching an officer in the face. Several others were detained on public order offences and another was found with brass knuckledusters, police said. All had been released by the following morning.

Spokeswoman Towe Haegg told Swedish radio police had not received any reports of violence against people from migrant backgrounds.

However, Aftonbladet interviewed one 16-year-old who said he had been hit in the face near Stockholm's central station. The newspaper also quoted another witness who said he had seen men beating up people who appeared to have a foreign background in the middle of the city's Sergelstorg square.

The men were wearing arm bands and have been reportedly linked to football hooligan gangs.

There were scuffles on Saturday between pro- and anti-migrant demonstrators, during which witnesses say foreigners were assaulted.

Tensions have increased after a 22-year-old employee was stabbed to death at a centre for young asylum seekers earlier this week. A 15-year-old asylum seeker was arrested in Molndal, near Gothenburg, over the murder.

Along with Germany, Sweden is a prime destination for refugees and other migrants entering the EU illegally. 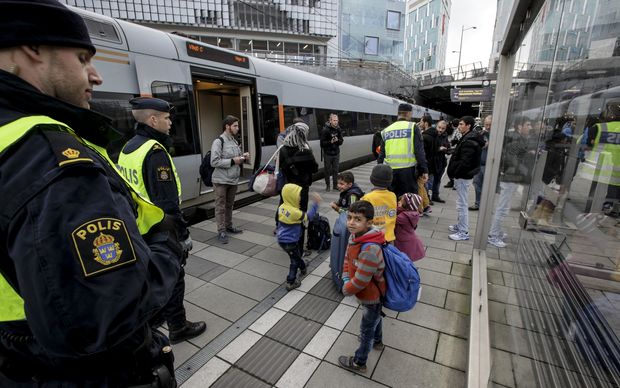 More than one million refugees and migrants travelled to Europe last year, most fleeing conflicts in Syria, Iraq and Afghanistan.

The numbers arriving in Sweden have fallen significantly it imposed tighter border controls this year.

On Thursday, Interior Minister Anders Ygeman said the country would prepare to deport up to 80,000 migrants whose asylum applications were rejected.