A Maoist cult leader who committed a string of sex assaults and kept his daughter captive in London for three decades has been jailed for 23 years. 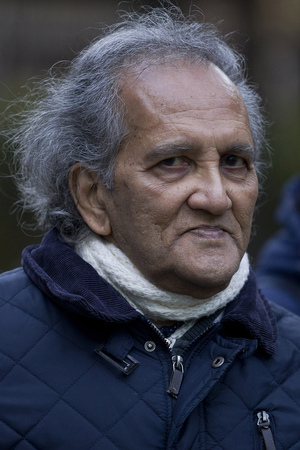 Aravindan Balakrishnan, 75, of Enfield, called himself Comrade Bala and brainwashed his cult into thinking he had god-like powers.

Over 30 years he also raped two of his followers, Southwark Crown Court heard.

His daughter Katy Morgan-Davies said the situation was "horrible, so dehumanising and degrading".

Ms Morgan-Davies, 33, who has waived her right to anonymity, said: "I felt like a caged bird with clipped wings."

Balakrishnan was convicted of offences including child cruelty, false imprisonment and assault.

The court heard he established the Workers' Institute of Marxism-Leninism-Mao Zedong Thought in the 1970s in south London and convinced his followers into thinking he could read their minds.

He warned them a supernatural force called Jackie would cause natural disasters if he was ever disobeyed.

Branding him a "narcissist and a psychopath", his daughter said: "The people he looked up to were people like Stalin, Mao and Pol Pot and Saddam Hussein - you couldn't criticise them either in the house.

"They were his gods and his heroes. These were the sort of people he wanted to emulate."

During the trial she told the court she was beaten and banned from singing nursery rhymes, going to school or making friends.

And she said her father was using the sect as a "pilot unit" to learn how to control people before taking over the world.

She said: "I used to think 'God, if the whole world is going to be like this, what way out is there? How am I going to live? I cannot live in this.'

"So I used to think that the best way would be to die."

Told she was a "waif", it was only when she was a teenager that she learned a follower of Balakrishnan, Sian Davies, then known as Comrade Sian, was her mother.

Ms Davies, a GP's daughter from Ceredigion, Wales, fell from a window at the cult's base on Christmas Eve in 1996 and died several months later in hospital.

Ms Morgan-Davies said that night she heard screaming and shouting and saw her mother lying in a pool of blood below the bathroom window pleading with Balakrishnan to "kill me".

She said in the subsequent years she would dream of her mother and wake up crying.

Sentencing Balakrishnan, the judge said: "You decided to treat her as a project, not a person.

"You claimed to do it for her to protect her from the outside world, but you created a cruel environment."

Ms Morgan-Davies managed to escape the cult in 2013 after memorising the number for an anti-slavery charity she saw on the news.

She has since moved to Leeds and started an education and said: "I've been a non-person all my life and now is my chance to be myself."

During sentencing the judge recommended that £500 be given to the charity Palm Cove Society, which helped Balakrishnan's daughter escape.