While conspiracy theorists might still insist that man never landed on the moon, the "hoax" would have been revealed in just 3.7 years, according to a new study. 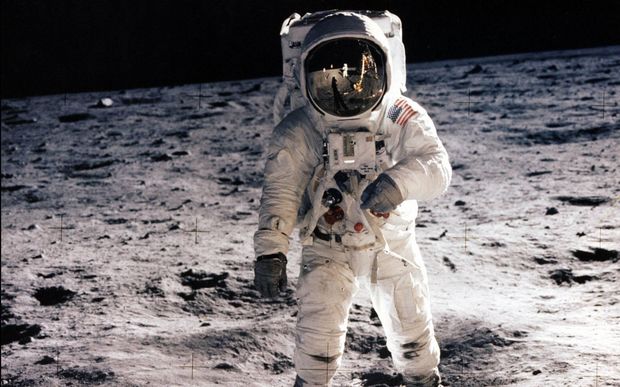 The study found that it would be difficult to keep a conspiracy under wraps, because sooner or later, one of the conspirators would blow its cover.

A study has examined how long alleged conspiracies could "survive" before being revealed - deliberately or unwittingly - to the public at large.

Dr David Grimes, from Oxford University, devised an equation to express this, and then applied it to four famous collusions.

The work appears in Plos One journal.

The equation developed by Dr Grimes, a post-doctoral physicist at Oxford, relied upon three factors: the number of conspirators involved, the amount of time that had passed, and the intrinsic probability of a conspiracy failing.

Dr Grimes' analysis suggested that if these four conspiracies were real, most were likely to have been revealed as such by now.

"The mathematical methods used in this paper were broadly similar to the mathematics I have used before in my academic research on radiation physics," Dr Grimes said.

To derive his equation, Dr Grimes began with the Poisson distribution, a common statistical tool that measured the probability of a particular event occurring over a certain amount of time.

Specifically, he was missing a good estimate for the intrinsic probability of a conspiracy failing. To determine this, Dr Grimes analysed data from three genuine collusions.

The first was the surveillance program conducted by the US National Security Agency (NSA), known as PRISM. This programme involved, at most, 36,000 people and was famously revealed by Edward Snowden after about six years.

The second was the Tuskegee syphilis experiment, in which the cure for syphilis (penicillin) was purposefully withheld from African-American patients.

The experiment may have involved up to 6700 people, and Dr Peter Buxtun blew the whistle after about 25 years.

The third was an FBI scandal in which it was revealed by Dr Frederic Whitehurst that the agency's forensic analysis was unscientific and misleading, resulting in the imprisonment and execution of innocent people.

Dr Grimes estimated that a maximum of 500 people could have been involved and that it took about six years for the scandal to be exposed.

The equation he created represented a "best case scenario" for conspirators - that is, it optimistically assumed that conspirators were good at keeping secrets and that there were no external investigations at play.

Crunching the numbers from the three known conspiracies, Dr Grimes calculated that the intrinsic probability of a conspiracy failing was four in one million.

Though this number was low, the chance that a conspiracy was revealed became quite large as time passed and the number of conspirators grew.

The Moon landing "hoax", for instance, began in 1965 and would have involved about 411,000 Nasa employees. With these parameters, Dr Grimes' equation suggested that the hoax would have been revealed after 3.7 years.

Additionally, since the Moon landing hoax is now more than 50 years old, Dr Grimes' equation predicts that, at most, only 251 conspirators could have been involved.

Thus, it was more reasonable to believe that the Moon landing was real.

Prof Monty McGovern, a mathematician at the University of Washington, said the study's methods "strike me as reasonable and the probabilities computed quite plausible".

Dr Grimes added: "While I think it's difficult to impossible to sway those with a conviction... I would hope this paper is useful to those more in the middle ground who might wonder whether scientists could perpetuate a hoax or not."