The US Treasury has told a BBC investigation that it considers Russian President Vladimir Putin to be corrupt. 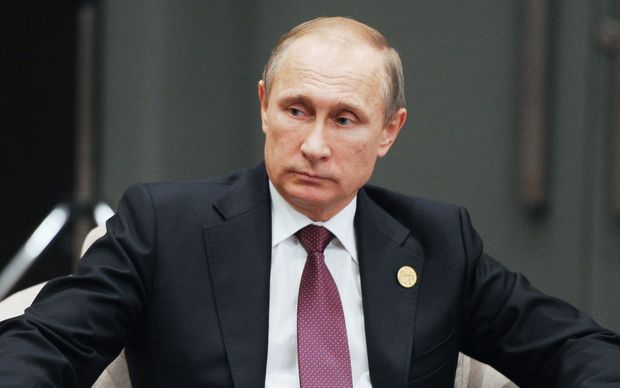 The US government has already imposed sanctions on Mr Putin's aides, but it is thought to be the first time it has directly accused him of corruption.

His spokesman told the BBC that "none of these questions or issues needs to be answered, as they are pure fiction".

Litvinenko, a former Russian Federal Security Service (FSB) agent and fierce critic of Mr Putin, was poisoned in London with radioactive polonium in 2006.

Adam Szubin, who oversees US Treasury sanctions, told BBC Panorama that the Russian president is corrupt and that the US government has known this for "many, many years".

He said: "We've seen him enriching his friends, his close allies, and marginalising those who he doesn't view as friends using state assets. Whether that's Russia's energy wealth, whether it's other state contracts, he directs those to whom he believes will serve him and excludes those who don't. To me, that is a picture of corruption."

The US government imposed sanctions against a number of Kremlin insiders in 2014 and stated that Vladimir Putin had secret investments in the energy sector. However, the Americans did not directly accuse him of corruption at the time.

The sanctions - later expanded to include more individuals and organisations - coincided with similar EU measures against Russia. The trigger for them was Russia's annexation of Crimea, during political turmoil in Ukraine.

US government officials have been reluctant to be interviewed about President Putin's wealth, but Mr Szubin agreed to take part in a BBC Panorama programme investigating the issue.

Mr Szubin would not comment on a secret CIA report from 2007 that put Mr Putin's wealth at around $US40bn. But he said the Russian president had been amassing secret wealth.

"He supposedly draws a state salary of something like $110,000 a year. That is not an accurate statement of the man's wealth, and he has long time training and practices in terms of how to mask his actual wealth."

The Kremlin denies such allegations. In 2008, President Putin personally addressed claims that he was the richest man in Europe, saying: "It's simply rubbish. They just picked all of it out of someone's nose and smeared it across their little papers."

But Panorama has spoken to former Russian insiders who say they have first-hand knowledge of Vladimir Putin's secret riches.

Dmitry Skarga, who used to run the state shipping company Sovcomflot, says he oversaw the transfer of a $35m yacht to Mr Putin. Mr Skarga says the 57m-long Olympia was a gift from Britain's most famous Russian - the Chelsea football club owner Roman Abramovich.

"It's a fact that Mr Abramovich, through his employee, transferred a yacht to Mr Putin," he said. "I was on board of this yacht at the end of March 2002, in Amsterdam. And there was a representative of Mr Abramovich… He said that Roman is the owner of this yacht."

Mr Skarga says the Olympia was then given to the Russian president via an offshore company. He then oversaw the management of the yacht for Vladimir Putin and prepared reports on the boat's running costs.

He said: "This yacht was maintained and paid for running costs from the state budget."

Mr Skarga says the yacht was kept secret because it belonged personally to Vladimir Putin, rather than the state.

Panorama asked Mr Abramovich about the yacht. His lawyers dismissed claims about him as speculation and rumour.

President Putin declined to be interviewed for Panorama.