State television said Rabia, in rebel hands for four years, was overrun by the army and "popular defence" forces. 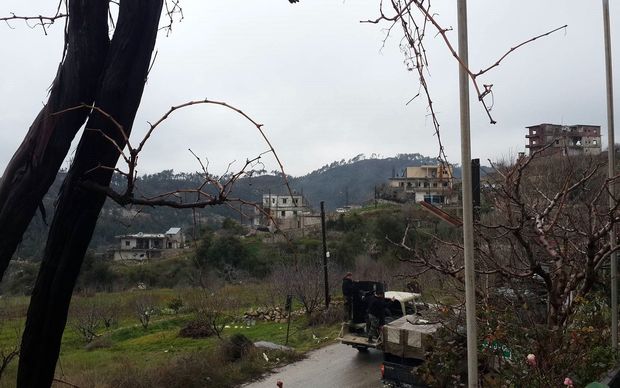 The province is a stronghold of the Alawite community to which President Bashar al-Assad belongs.

Russian forces played a key role in the recapture of Rabia, according to the UK-based monitoring group, the Syrian Observatory for Human Rights.

The head of the Syrian Observatory, Rami Abdel Rahman, told AFP that President Assad's forces had surrounded the town from three sides in the space of 48 hours by capturing several villages.

On its website, the group, which relies on monitors to supply information from the ground, said regime forces backed by Russian officers and Hezbollah militants subsequently took control of the villages of Daroshan and al-Rawda.

The Syrian Observatory speaks of violent clashes between Syrian forces and al-Nusra Front fighters. Rabia had been controlled by different groups including al-Nusra - an al-Qaeda affiliate.

Government troops and militiamen, supported by Moscow's air power and joined on the ground by Lebanese Hezbollah fighters and Iranian forces, have pressed offensives in the west and northwest of the country in recent months, seeking to reverse gains made by insurgents last year.

The latest advance comes ahead of peace talks in Geneva between Damascus and Syria's opposition.

The talks, originally set for Monday, now look likely to be delayed, partly due to a dispute over the opposition negotiating team's composition. The opposition has also said Russia must stop bombing civilian areas and Damascus must lift sieges before it will join talks.

The recapture of the town of Rabia has paved the way for an advance up to the border with Turkey, the Syrian Observatory for Human Rights said. Turkey supports insurgents battling the forces of President Bashar al-Assad, who has the backing of Russia and Iran.

The Observatory described Rabia as the "second most important base for (rebel) fighters in the northern Latakia countryside" after the town of Salma, which pro-government forces seized earlier this month in one of the most significant advances since Russia joined the fight.