Donald Trump's Republican presidential bid has received the backing of Sarah Palin, the populist ex-governor of Alaska who was the Republican vice-presidential candidate in 2008.

"Are you ready to stump for Trump?" Mrs Palin asked cheering supporters at a campaign rally in Iowa. 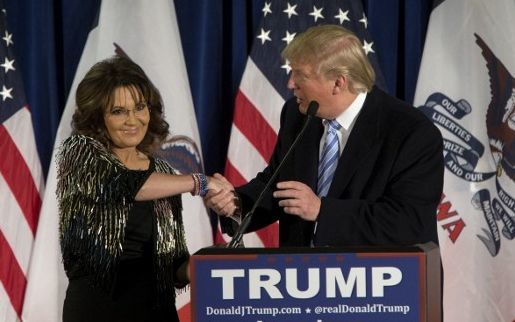 She was John McCain's running mate in 2008 before they lost to Barack Obama.

Despite retiring from politics in favour of a media career, she remains an influential conservative voice.

"We are ready for a change," she told the rally in Ames, Iowa.

"He (Trump) is beholden to no one but 'we, the people'. He is perfectly positioned to let you make America great again."

The New York businessman, who leads the Republican race, said in a statement that he was "proud" to receive her backing.

Mrs Palin was a "trusted conservative" with a "proven record of being fiscally modest, staunchly pro-life and [she] believes in small government that allows businesses to grow and freedom to prosper", the statement added.

Mrs Palin was just two years into her Alaskan governorship when she was picked by John McCain to be his running mate.

After the election in 2009, she resigned as Alaska governor and has since forged a lucrative career as a writer and political commentator.

Ahead of the announcement, Mrs Palin tweeted a link to an article by her daughter Bristol attacking Mr Trump's main rival for the key Iowa caucus, Ted Cruz.

Iowa is the first chance for voters to have their say in the nomination race.

Mr Cruz has himself praised Mrs Palin saying "without her support, I wouldn't be in the Senate" - a reference to her backing that helped him to his surprise victory in a 2012 Senate run-off election.

Democratic frontrunner Hillary Clinton's campaign team tweeted caustically after the announcement to Mrs Palin: "congrats to the Youtube commenter who wrote your remarks".