A US Muslim woman who was ejected from a Donald Trump rally in South Carolina while engaging in a silent protest said she wanted to make the Republican presidential candidate's backers recognise they are supporting "hateful rhetoric." 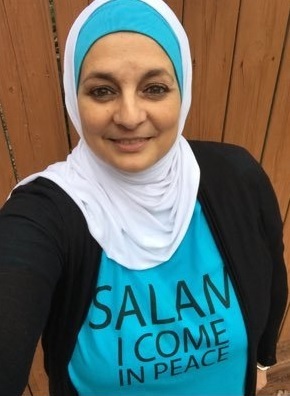 Rose Hamid, a 56-year-old flight attendant from North Carolina, stood up silently in the stands directly behind Mr Trump during Friday night's (local time) rally when the billionaire businessman suggested that refugees fleeing violence in Syria were affiliated with Islamic State militants.

"I get why he's popular: he's an entertainer, he's engaging, there are certainly aspects that appeal to certain parts of society. He even has valid points in some cases," Hamid said in a telephone interview from her home in Charlotte.

"But they have to recognise what they're supporting," Ms Hamid said, referring to Mr Trump's supporters. "His ramping up of his hateful rhetoric is just not what America is, and it's not who we are as a country."

At the rally, Ms Hamid was wearing a white head scarf and a blue T-shirt made by her son emblazoned with the words, "Salam, I come in peace."

Trump supporters have taken to social media to denounce her actions, while some have said there is more to her story than what was being reported.

You need to know more about Rose Hamid. She is an activist with close ties to CAIR. She is not a peaceful Muslim. https://t.co/UcOmeqAJ9N

Other Twitter users, however, spoke out in their support of Ms Hamid, thanking her for taking a stand.

What #RoseHamid did at the Trump rally took courage. She was respectful and sees the value of every person. We need more people like her.

Ms Hamid, who called herself a registered Democrat, said she came to the rally because she had a day off from work and wanted Mr Trump supporters to meet a Muslim in real life. She said she told herself she would stand up quietly if Trump said anything hateful about any group, not just Muslims.

As she stood, people in the crowd around her at the rally in Rock Hill, South Carolina started yelling "Trump! Trump!" as organisers earlier had instructed them to do. Soon afterwards, security officers showed up at her seat and, with little explanation, told her and a friend they had to leave the premises, she said.

She was later told she was trespassing at a private event, she said.

The Council on American-Islamic Relations (CAIR), a Muslim advocacy group, called on Mr Trump to apologise after the incident, which ignited a firestorm on social media and prompted criticism by at least one fellow Republican.

"The image of a Muslim woman being abused and ejected from a political rally sends a chilling message to American Muslims and to all those who value our nation's traditions of religious diversity and civic participation," said Nihad Awad, executive director of the CAIR. 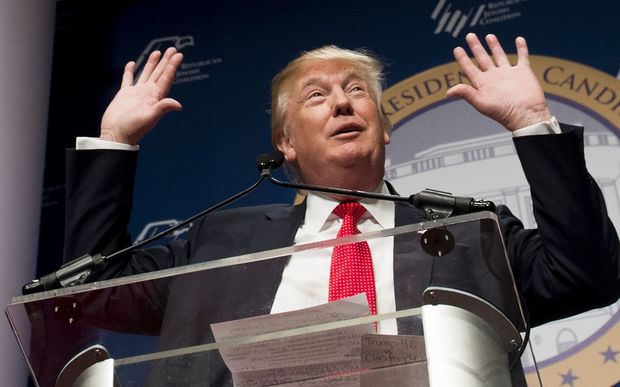 "We don't need to be shouting and booing and scaring somebody who decided to stand up and have some sort of silent protest," Mr Kasich told reporters on the sidelines of a poverty summit in South Carolina on Saturday (local time).

The incident was the latest controversy involving Mr Trump regarding Muslims. He last month advocated banning all foreign Muslims from entering the United States "until our country's representatives can figure out what is going on."

In November, he said he saw thousands of Muslims in Jersey City, New Jersey, cheering the September 11, 2001, attacks on New York's World Trade Center. Fact-checkers have debunked this assertion.

Ms Hamid said some Trump supporters may not be looking past his showy campaign to see the damage he is doing.

"His supporters really need to look at what it is that he's proposing, and the type of bully mentality that he has of disrespecting people to such a tremendous degree."

She hopes the other Republican White House hopefuls will decide it is better to leave what she called hateful speech out of their campaigns instead of emulating Mr Trump.

"I think that rest of the pack is looking at what Trump is doing and then doing whatever it is they think will get them higher in the (poll) numbers," she said. "Hopefully, his numbers will drop, and that will give the message to everybody else that the fear-mongering is not the way to go."

Shewas leaning toward supporting Vermont Senator Bernie Sanders, who is seeking the Democratic presidential nomination in November's election. That said, she said she had not made a decision on who would get her vote.

Ms Hamid is president of a group called Muslim Women of the Carolinas, but she said it is a social organisation, not a political one, and was not involved in her action on Friday.

At a rally on Saturday in Ottumwa, Iowa, Mr Trump cited last month's San Bernardino, California massacre and the shooting of a Philadelphia police officer on Friday by a man who police said pledged allegiance to Islamic State as examples of Muslim anger toward Americans.

"The hatred is so incredible," he said. "And the danger, when we have people willing to fly airplanes into the World Trade Center and many other things, we've got to solve it."

Mr Trump's campaign did not respond to a request for comment on the incident.