The Syria-based mastermind behind the Jakarta attacks took "lessons" from Paris when orchestrating the event which killed two civilians. 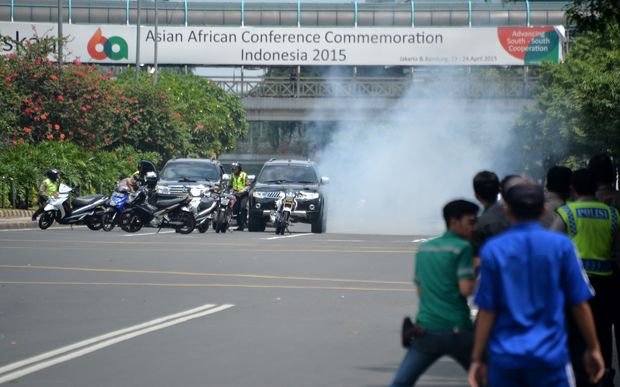 Police (L) hide behind vehicles during an exchange of gunfire with suspects hiding near a Starbucks cafe when another blast hits. Photo: AFP

Seven years ago, Bahrun Naim was quietly running an Internet cafe in the small Indonesian city of Solo.

On Thursday he was identified by police as the mastermind behind the deadly attack on Jakarta claimed by Islamic State, pulling the strings from Raqqa, the radical group's de facto capital in Syria.

In between, Naim was arrested in 2011 for illegal arms possession and jailed for three years, and police say that since then he has emerged as a key player in militant networks that have sprouted around Solo and across Central Java.

A year ago, he left for Syria to join the frontlines of Islamic State, and police believe Naim was closely involved in coordinating Thursday's assault.

Five of the attackers and two civilians were killed in Islamic State's first strike against Indonesia, the world's most populous Muslim nation where the group wants to establish an Asian beachhead for its "caliphate".

There had been hints of what was to come for weeks.

After the coordinated attacks across Paris in November, the militant intellectual published a blog in which he explained to his followers how it was easy to move jihad from "guerrilla warfare" in Indonesia's equatorial jungles to a city. 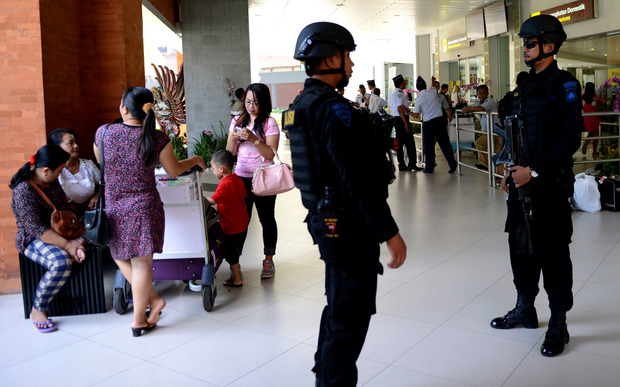 Reuters contacted Naim on November 24 on Telegram social messaging, using details provided by one of his acquaintances. In that exchange, he said there were more than enough Islamic State supporters to "carry out an action" in Indonesia.

"Just waiting for the right trigger," the man identifying himself as Naim said.

Naim could not be reached for comment on Thursday.

Intelligence experts say that, not long after that Telegram exchange, intelligence officials began to pick up talk in social messaging chatrooms that an attack on Indonesia was imminent.

"Chatter among Islamists began to become more organised last month and there were discussions for the first time of a multiple attack," said a Jakarta-based security adviser, who monitors radical group discussions on mobile messaging services for the government.

Counter-terrorism officials believe there are at least 1000 sympathisers of the radical jihadist group across Indonesia.

The eavesdropping helped lead police to the arrest of more than a dozen men across the populous island of Java who were suspected of planning attacks over the Christmas and New Year holidays.

Bomb-making materials, a suicide vest and "jihad manuals" were found during the raids. Police said some of those rounded up had received funding and support from Naim, who believes Indonesia should be governed strictly as an Islamic country.

Naim had been planning the attack on Indonesia's capital for a while, Jakarta Police Chief Tito Karnavian said on Thursday, adding that he clearly had ambitions to become "the leader" of Islamic State in Southeast Asia.

Sidney Jones, a Jakarta-based expert on Islamist militants at the Institute for Policy Analysis of Conflict, said in a November report that there was only a slim chance in Indonesia of an attack on the scale seen in Paris, but she warned then that the threat was growing under the government's nose. 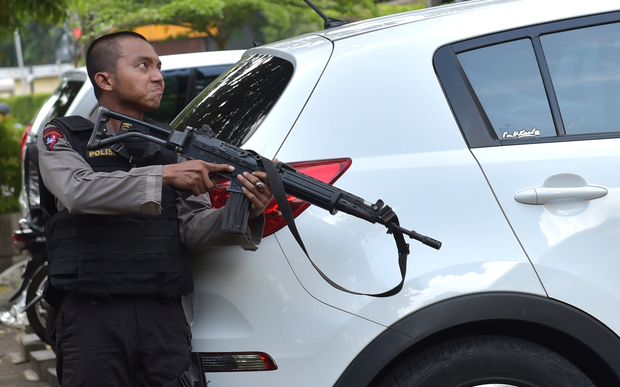 She noted that in one blog post, entitled "Lessons from the Paris Attacks", Naim urged his Indonesian audience to study the planning, targeting, timing, coordination, security and courage of the Paris jihadis.

That said, experts have pointed out that the relatively low death toll in the Jakarta assault suggested the involvement of local, poorly armed militants with little or no training.

In the Telegram exchange with Reuters, Naim also spoke of more mundane affairs, explaining that he enjoyed life in Syria and had no plans to return to Indonesia.

"I move around, depending on where our emir orders us to go. It's good here in Syria. There's electricity, accommodation, water and it's free. The services provided by them are good, cheaper than in Indonesia," he said.