At least seven people - including four suspected attackers - have been killed in Jakarta, with grenades reportedly thrown by men on motorcycles. 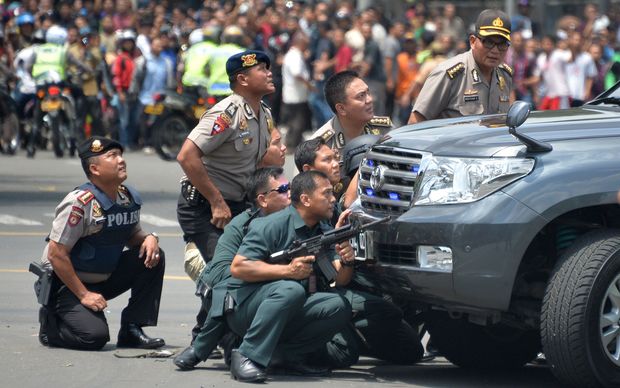 Police take up position behind a vehicle as they pursue suspects after a series of blasts hit the Indonesia capital Jakarta. Photo: AFP

Eight explosions were heard in the centre of the Indonesian capital and casualties were seen lying on the ground.

AP has reported that three people have been killed by explosions and gunfire, with four suspected attackers killed by police gunfire.

Police said grenades, not bombs, were behind the blasts, which came before reports of gunfire.

One of the explosions was reported in a Starbucks cafe and security forces were later seen entering the building.

"For now the gunfire has stopped but they are still on the run, we are afraid there will be more gunshots," national police spokesman Anton Charliyan told AFP news agency.

The blasts happened outside the Sarinah shopping centre, near the presidential palace and UN offices, say reports.

A BBC reporter at the scene said police cordoned off the area. He said they occasionally took cover behind cars.

There is no indication yet of who might be behind the assault.

Indonesia has been attacked by Islamist militant groups in the past and has been on high alert.

The latest from office window. No view of scene. Seeing tactical teams going in, pic.twitter.com/abkxHNganC

A national police spokesman told AFP people had been warned to stay indoors in case of further explosions.

A UN official, Jeremy Douglas, told the BBC had been about 150m away from one of the blasts.

"Then we ran into the building. We heard a third explosion. We got up to our office on the tenth floor and we heard a fourth, a fifth and a sixth.

"There is gunfire going on in the street right now."

A Reuters photographer said one explosion had been at a Starbucks cafe, with its windows blown out.

He said police appeared to be aiming guns at a man on the roof of the building.

Officers at the scene told AFP news agency reporters to "get back" because there "is a sniper" on the roof of a building.

"The Starbucks cafe windows are blown out. I see three dead people on the road," a Reuters photographer who was on the scene said.

"There has been a lull in the shooting but someone is on the roof of the building and police are aiming their guns at him."

Editor-in-chief of the Jakarta Post, Meidyatama Suryodiningrat, said the targeted area was quite popular.

"It's less than one-and-a-half kilometres to the palace, it's basically where the centre of government is," he said.

"Five hundred metres away is the central bank building, you have multiple government buildings, major major centre of government area."