Revenge drama The Revenant and space adventure The Martian won the top movie prizes at the Golden Globes on a night of surprises, laughter and barbed comments from fourth-time host Ricky Gervais. 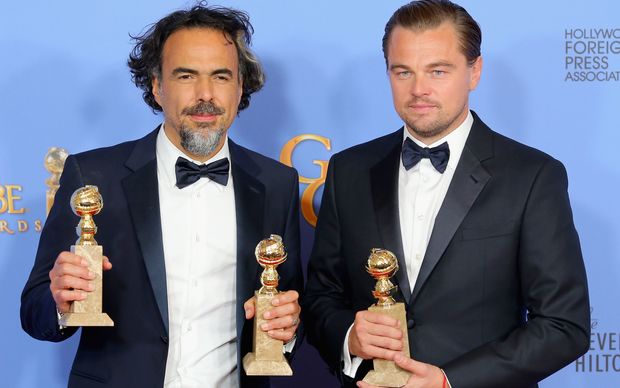 The Golden Globes were handed out by the Hollywood Foreign Press Association at a glitzy Beverly Hills dinner.

In a closely-contested men's field, Leonardo DiCaprio won for his lead role as a fur trapper seeking retribution in The Revenant while Matt Damon's astronaut stranded on Mars in The Martian won the comedy acting award.

The Revenant also brought a directing prize for Alejandro Inarritu, who recalled the long arduous shoot in sub-zero temperatures.

"Pain is temporary, but a film is forever."

Jennifer Lawrence won best comedy movie actress for her portrayal of the Miracle Mop inventor in Joy, while 26-year-old Brie Larson beat veteran Cate Blanchett to take home her first major award for playing a young woman who is abducted and locked up for years in the movie drama Room.

"I want to thank my imaginary friend Rocky Balboa for being the best friend I ever had," Stallone said.