Carol has scored the most nominations for the 2016 Golden Globe Awards with five nods. 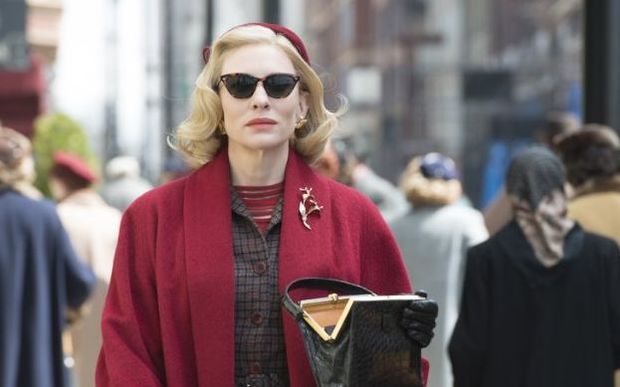 Cate Blanchett and Rooney Mara are both up for best actress in a drama for their roles in the 1950s-set film about a glamorous housewife who falls for a younger woman.

The Revenant, The Big Short and Steve Jobs all received four nominations.

The best drama actress category also sees Room's Brie Larson nominated against Blanchett and Rooney Mara, as well as Saoirse Ronan for Brooklyn and Alicia Vikander for The Danish Girl.

Leonardo DiCaprio's performance in The Revenant was recognised for a best drama actor nomination, alongside Bryan Cranston in biopic Trumbo, Michael Fassbender in Steve Jobs and Will Smith in Concussion.

Eddie Redmayne, who won the award last year for his role in The Theory of Everything, is nominated again this year for his portrayal of transgender pioneer Lili Elbe in The Danish Girl.

In the musical or comedy film categories, US financial crisis movie The Big Short is up for best film, competing against Spy, Trainwreck and surprise nominees The Martian and Joy.

Jennifer Lawrence is also nominated for best actress in a musical or comedy for her role in Joy - a biopic about the inventor of the Miracle Mop - along with Melissa McCarthy for Spy, Amy Schumer in Trainwreck, Dame Maggie Smith in The Lady in the Van and Lily Tomlin in Grandma.

The best actor in a musical or comedy category sees The Big Short's Christian Bale and Steve Carell nominated with Matt Damon for The Martian, Al Pacino in Danny Collins and Mark Ruffalo in Infinitely Polar Bear.

Among the British stars nominated in the best supporting actor and actress categories include Idris Elba for Beasts of No Nation, Mark Rylance for Bridge of Spies, Dame Helen Mirren for Trumbo and Kate Winslet for Steve Jobs.

British film-maker Ridley Scott is also nominated for best director for his sci-fi blockbuster The Martian.

And singer Sam Smith also has a best original song nod for Writing's on the Wall - the theme to James Bond film Spectre.

In the television categories there was a much broader spread of nominations. American Crime, Fargo, Mr Robot, Outlander, Transparent and Wolf Hall all landed three nominations each.

BBC drama Wolf Hall is up for best TV miniseries or TV film, with its stars Mark Rylance and Damian Lewis nominated for best actor and best supporting actor.

Meanwhile Casual, Mozart in the Jungle, Orange is the New Black, Silicon Valley, Transparent and Veep are all nominated for best musical or comedy TV series.

Among the best TV drama actors and actresses who received nods include Jon Hamm for the final series of Mad Men, Taraji P Henson for Empire, while Jamie Lee Curtis and Rob Lowe were also nominated for their new shows Scream Queens and The Grinder in the TV comedy categories.

Another surprise nomination came for Lady Gaga, recognised in the best actress in a miniseries for her role in American Horror Story: Hotel.

The nominations and eventual winners are decided by the 93 members of the Hollywood Foreign Press Association - a group of entertainment editors and writers from 55 countries who report on the industry year-round.

Ricky Gervais will return to host the ceremony on 10 January - his third time fronting the awards.

Best performance by an actor in a motion picture - drama

Best performance by an actress in a motion picture - drama

Maggie Smith, The Lady in the Van

Idris Elba, Beasts of No Nation

Love Me Like You Do, Ellie Goulding - Fifty Shades of Grey

Mozart in the Jungle

Orange is the New Black

Best mini-series or motion picture made for television

Best performance by an actor in a television series - drama

Best performance by an actress in a television series - drama

Viola Davis, How to Get Away with Murder

Aziz Ansari, Master of None

Oscar Isaac, Show Me a Hero

Best performance by an actor in a supporting role in a series, mini-series or motion picture made for television

Best performance by an actress in a supporting role in a series, mini-series or motion picture made for television