A network of nine radio telescopes, dotted around the globe, is set to take the first ever picture of a black hole's event horizon in 2017. 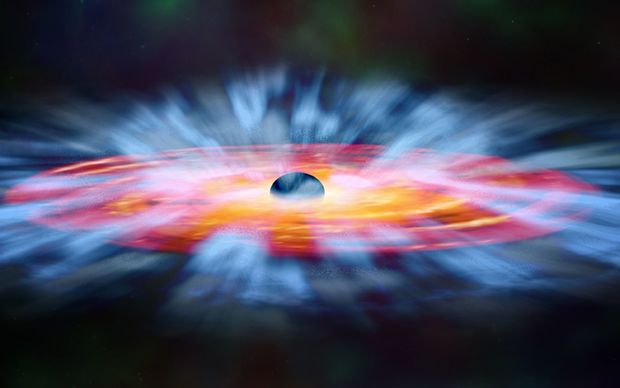 A NASA artist's illustration of the turbulent winds of gas that swirl around a black hole. Photo: AFP

The project, called the Event Horizon Telescope, has completed most of its technical preparations as well as extensive theoretical calculations.

It will focus on Sagittarius A*, the black hole at the Milky Way's centre.

Speaking at an astronomy conference in Florida, EHT team member Feryal Ozel said all the elements were in place.

She told BBC News: "We're almost there. The phasing in of the instruments has been done, the receivers are in place and the theoretical work has been done.

"There are quite a few challenges that need to be overcome to take a picture of a black hole - it's something that's extremely small in the sky. But what we're hoping for is a full array observation in early 2017."

Prof Ozel, from the University of Arizona, gave an update on the project at the 227th meeting of the American Astronomical Society.

Supermassive though it may be, the heart of the Milky Way's black hole is not as big as you might think; the event horizon of Sagittarius A* is just 24 million km across - 17 times bigger than the Sun.

At 25,000 light years away, that makes it a pinprick. From the surface of the Earth, Prof Ozel explained, it takes up about as much of the sky as a CD sitting on the moon.

And surrounding this mysterious, spherical frontier are roiling clouds of gas and dust, which blaze with energy as they are sucked and squeezed furiously towards it.

These clouds are trouble for the EHT astronomers, who want to peer closer than ever before at this fringe of the observable universe.

One of their most important decisions was choosing which wavelength of light they would use. Radio waves were an obvious place to start, because they are scattered much less by this material than visible or infra-red light.

Then it took a lot of theoretical calculations to settle on the specific wavelength of 1.3mm, as Prof Ozel explained.

"We've run upwards of a million simulations, for many different configurations of what that gas might look like. And in all cases, we think that the 1.3mm wavelength is the right choice to see down to the event horizon."

It was an "incredibly lucky coincidence", she added, that any wavelength at all was feasible.

Because as well as penetrating the black hole's dust cloud, Prof Ozel and her colleagues need the hot gas right at the event horizon to shine brightly in this colour - which they believe it does.

Finally, the light has to travel easily through the Earth's own atmosphere into the dishes of the waiting telescopes; 1.3mm fortunately fits that bill in every case.

The nine stations enlisted to stare at SagA* include the big dishes in Antarctica, Chile, Hawaii, Spain, Mexico and Arizona.

Altogether this makes what the team calls a "virtual telescope the size of the Earth".

Einstein on the line

So what will this mammoth eye actually see?

This is because the glowing gas is spinning around the black hole, and a dramatic Doppler effect should make the stuff moving towards the Earth appear much brighter.

"The rest of the ring will also emit, but what you will brightly pick up is a crescent."

In fact, the picture that emerges from the EHT next year will put general relativity on the line.

Einstein's theory states that a mass - especially one as big as a black hole - bends space-time. And that curvature can be calculated mathematically.

So the size of the shadow cast by SagA* will either match what is predicted by general relativity, or it won't.

"We know exactly what GR predicts for that size," Prof Ozel said - making this observation what scientists call a "null hypothesis test" of the theory.

Astronomers rely on general relativity all the time, making use of the way masses bend the path of light. But it has never been tested on this scale before.

"Imagine how much light-bending our sun can achieve. Thomas Eddington's 1919 experiment measured that level of deflection.

Beyond the Milky Way's own SagA*, the EHT team already has plans to look further afield at galaxy Messier 87. Its black hole is much bigger and is known for blasting an immense jet of plasma into space.