The South Australian community of Port Lincoln is in shock after a man drove himself and his two young children off the end of a wharf at high speed. 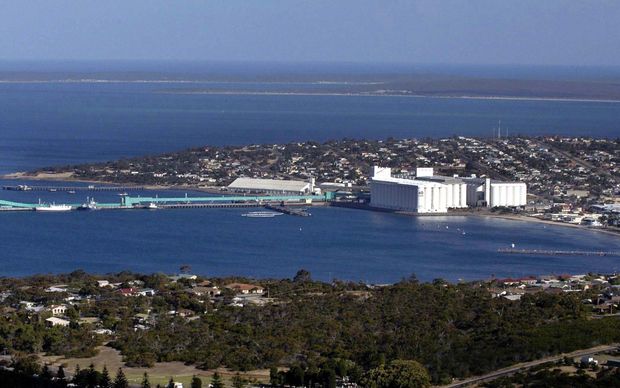 The bodies of Damien Little and his children were found in the submerged car by police divers after the car went off the wharf on Monday morning.

The white station wagon sank in up to 30m of water, with police saying the incident appeared to have been a murder-suicide.

They said a rifle had been recovered from the car.

Friends of Mr Little, who asked not to be named, described him as a "top bloke" and someone who was always ready to help others.

They said his elder boy had been a "bubbly, energetic" child who was a joy to be around.

Lincoln South Football Club president Brenton Dennis said Mr Little was respected and well-liked and had been heavily involved in the football community.

"You couldn't have asked for a better bloke," he said.

"I've been involved with him through football and I know both families - it's just something that you hear about elsewhere and the way it's touched our community here it's just indescribable."

Mr Dennis said the community was struggling to come to terms with the tragedy.

"I think everyone is pretty gutted and distraught and bewildered by what's happened," he said.

"It's just numbed the whole community. I just ask everyone give the families all their love and respect and space that they need at this time.

"I also ask everyone that you think about how our lives are at the moment and just put ourselves in their position and let's all make a promise to never let this happen again."

"Our hearts go out to Mel. I wouldn't want anyone to be in the position she's in at the moment," he said.

"It's just tragic and our hearts are with them and they're in our thoughts and our prayers."

Grieving community members visited the wharf late into the night to remember the victims and lay flowers at the scene.

People were in tears as they reflected on the tragedy.

Another of the locals, Lynette Pycroft, said the victims were from a close family.

"They're a tight family, they're a really close family so it's going to really affect them pretty bad," she said.