Hundreds of residents and holidaymakers along southern Australia's popular Great Ocean Road have been evacuated as hot, windy weather threatens to recharge bushfires which destroyed 100-plus homes on Christmas Day. 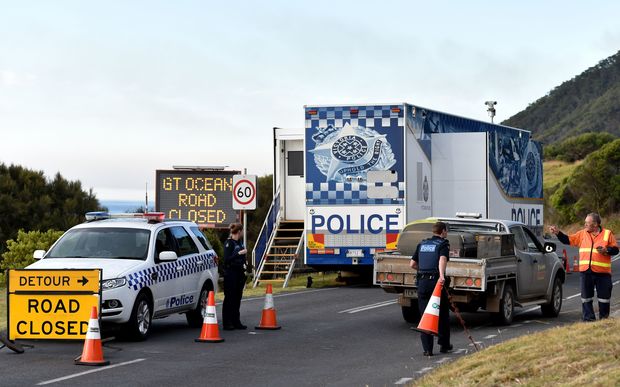 Police block the Great Ocean Road through to Apollo Bay in Lorne due to fears the bushfire would flare up again. Photo: AAP / Tracey Nearmy

Residents in three coastal towns in the popular holiday area were advised to leave their homes as temperatures were forecast to reach a high of almost 40°C.

The hot summer weather threatened to escalate fires that have been burning for almost two weeks.

"The local community has listened to the best of advice and will leave their homes because on such a challenging day, with that fire still active, so close to them, it's not safe for them nor is it safe for those who have been called on to protect them," Victoria state Premier Daniel Andrews told reporters.

The fires were started by a lightning strike on 19 December and continue to burn and spread. The Country Fire Authority estimates the blazes have burnt out more than 2500ha of land.

Authorities estimate 116 homes were destroyed by the fires on Christmas Day.

The Country Fire Service said a fire burning in stubble on South Australia's Fleurieu Peninsula is causing a risk to lives and around 15 houses in the Kokoda Hill area.

Once the immediate threat has passed, some relief could be on the horizon for residents with temperatures forecast to drop in the coming days. Isolated showers are also predicted for some parts of the southern coast.

The Great Ocean Road is one of Australia's biggest tourist draws with its spectacular scenery and unusual offshore rock formations. Parts of the road remained closed to traffic on Thursday during what is typically one of its busiest times of the year.

In 2009, Victoria witnessed Australia's worst-ever bushfire disaster, with 173 people killed in what has been dubbed "Black Saturday".