Authorities have confirmed the number of houses lost to a bushfire along Victoria's southern coast has risen to 116, with the fire not yet under control. 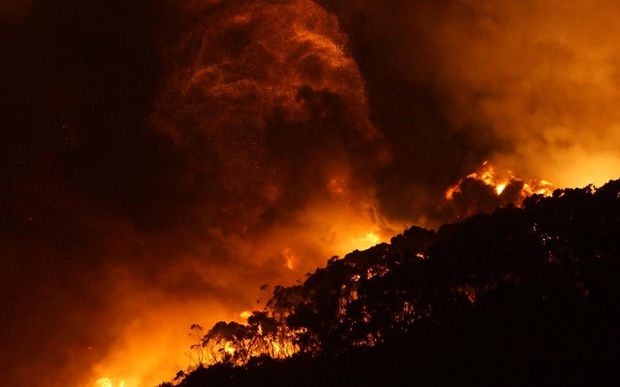 A bushfire at Wye River near Lorne, south in Melbourne, on Boxing Day. Photo: AAP

At Wye River, 98 homes were destroyed, while 18 were lost at Separation Creek. Fire officials said the majority of the properties lost were holiday homes.

The Insurance Council of Australia estimates the losses to be worth $AU38 million and it is expected that number will increase as claims are made.

The Great Ocean Road area has been declared a catastrophe, allowing the insurance industry to "escalate its response" to the fire crisis.

Victorian Premier Daniel Andrews, who flew over the fire zone, said the property losses were "significant".

"It's kind of confirmed for us just how hot, just how volatile, just how intense this fire was, burning right to the water's edge," he said after a community meeting at Apollo Bay.

"Our challenge now is to make sure that we provide those grants, and they're already flowing.

"I'm here to show that all Victorians stand with the communities of Wye River, Sep Creek as well, and others who are doing it very, very tough at the moment."

Government grants of $AU1300 will be made available to those who have lost their homes or are unable to return.

Teams have fanned out across the fire zone to conduct damage assessments. Mr Andrews said there would be a big rebuilding process in the towns.

"The state government stands ready to provide whatever support, whatever the resources, the council and others need to make sure that we can rebuild and support and empower people through what will be a very challenging process, not for weeks and months but indeed for years." 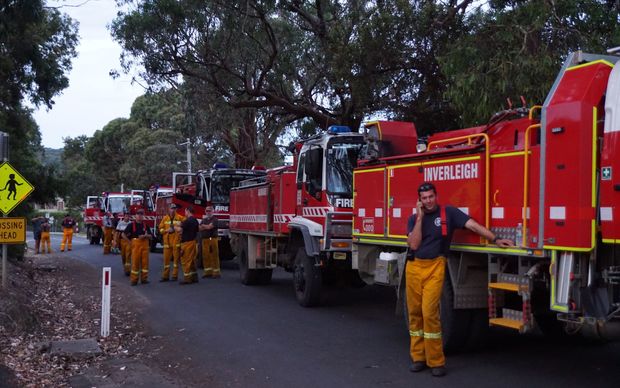 Hundreds of firefighters and dozens of tankers and aircraft have been battling the blaze. Photo: AFP

Earlier authorities said Victoria should "stand proud" that no one died and communities heeded warnings to evacuate.

Hundreds of firefighters and dozens of tankers and aircraft have been battling the blaze, which was sparked by a lightning strike last weekend.

The fire, which has so far burned more than 2200 hectares, is not yet under control.

An emergency warning remains in effect for Wye River and Separation Creek, and a watch and act advice is current for Kennett River and Grey River.

After the public meeting at Apollo Bay, local resident Roderick Pool said it was great to see the community come together in one place.

"There's information coming from all angles all the time via social media and the internet so to actually get together in person makes a huge difference," he said.

Mr Pool evacuated from his home at Wongarra voluntarily.

"The alerts got worse and worse when we were out, so it was good to get away and be able to watch it from a distance," he said.

Separation Creek resident Nick Bailey said his family evacuated to Apollo Bay, where they spent Christmas Day on the beach.

"[It was] a strange experience looking back across the bay at all of that column of smoke whilst we were trying to enjoy our Christmas," he said.

"We just want to get back in there and see what's what.

"We'd been driving up and down the Great Ocean Road... You could see where the fire was slowly smouldering, then the wind got up and the thing just went mad." 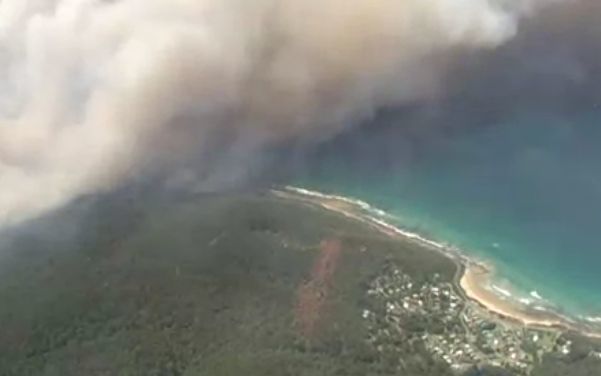 An aerial view of the fire in the Otway Ranges near the Wye River. Photo: ABC

Emergency Services Commissioner Craig Lapsley said he was disappointed that they lost so many homes at Wye River but he said it could have been much worse.

He said the local CFA brigade was only able to protect several major sites but other support fire trucks went into the area on Friday afternoon.

Mr Lapsley said the Great Ocean Road past Lorne would probably remain closed for a week before it was made safe for traffic.