Afghan government forces have lost control of the centre of the town of Sangin in Helmand province after days of fierce fighting.

Officials said that the Taliban controlled the local government building and police station. 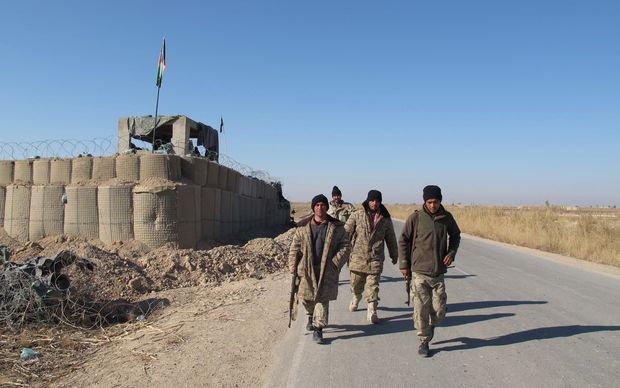 The Taliban said their fighters had seized the entire district and that their flag was flying over Sangin.

However, the Afghan defence ministry said fighting was continuing and that reinforcements had been sent.

Eyewitnesses said some government forces were still fighting in the district centre but were cut off.

District governor Haji Suliman Shah told the BBC he had been airlifted from the district headquarters to Shorabak base - formerly Camp Bastion - in Lashkar Gah early on Wednesday, along with 15 wounded security force members.

Meanwhile Ashuqullah, a police officer with an Afghan army brigade at a barracks about 7km from Sangin, told the BBC the "entire" town was controlled by militants.

"Support troops have been airdropped at a distance... but all roads are blocked and in the militants' control," he added.

He said a few hundred members of the security forces were besieged at the barracks.

Afghanistan's acting Defence Minister Masoum Stanikzai described the situation in Helmand as "manageable" and said fresh support troops had been sent in.

However the evacuation by air of the top government official from Sangin suggested many believed the district centre would fall under Taliban control at some point on Wednesday, sa the BBC's Waheed Masoud in Kabul.

"The Sangin district centres, its police HQ, and other establishments were under continued attacks of the mujahideen and today... with God's grace the district was fully captured by the mujahideen.

"The white flag of the Islamic emirate is at full mast at the district now.''

Haji Daud, the head of the Sangin district people's council, told the BBC that Sangin residents had fled the district to neighbouring areas.

Responding to the defence minister's claims, he said: "Those whose family - brothers and siblings and parents - are not fighting on the front, they always say the situation is not dangerous in the area..."

"Those who make such comments do not care to defend Helmand."

Of the 456 UK military deaths in Afghanistan from 2001 to 2015, almost a quarter were killed in and around Sangin

US and British troops have been sent to Helmand in the last few days, but in an advisory role only