Police in Sydney have arrested a 15-year-old and a 20-year-old in a counter-terror operation. 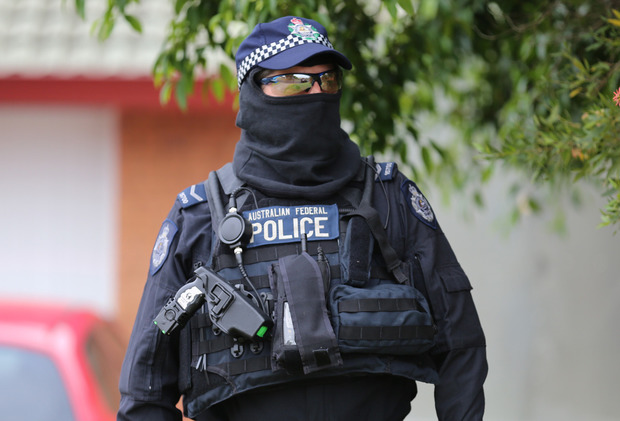 They have been charged with "conspiracy to conduct an act in preparation for a terrorist act", Australian Federal Police said.

The arrests are linked to a plot outlined in material seized last year as part of Operation Appleby.

That operation, in September 2014, was sparked by intelligence reports that Islamist extremists were planning random killings in Australia.

At least 800 heavily armed officers arrested 16 people as part of Operation Appleby in September 2014, in what was Australia's biggest ever anti-terror operation.

Police said the arrests on Thursday were not linked to a new plot, but to documents seized during those raids that talked about a plan to target government and police buildings.

Three other people already in jail for other offences will also face new charges, they said.

"As a result of putting all of that information together, working through those documents, putting physical and electronic surveillance together, we were able to build a case of conspiracy for five people involved in the preparation of these documents," Deputy Commissioner of National Security Michael Phelan said.

Those arrested on Thursday are also known to those involved in the terror-linked shooting of Sydney police worker Curtis Cheng, police said.

Mr Cheng, 58, was shot dead outside his police headquarters office as he left work last October.

"It is disturbing that we continue to deal with teenaged children in this environment," Deputy Commissioner Catherine Burn said.

"To be putting a 15-year-old before the courts on very serious charges that carry a maximum penalty of life imprisonment demonstrates the difficulties law enforcement face."

Police said a total of 11 people had now been charged under Operation Appleby.