Republican presidential hopeful Donald Trump has provoked condemnation from across the political spectrum, after he said Muslims should be banned from entering the US. 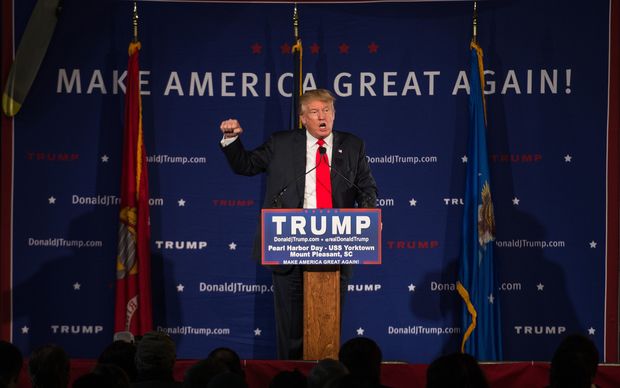 Republicans, Democrats, Muslim leaders, the UN and foreign leaders criticised the call as dangerous and divisive.

Mr Trump said many Muslims nursed a "hatred" towards America.

He said they should be banned "until our country's representatives can figure out what is going on".

His campaign manager said that would apply to "everybody" - would-be immigrants and tourists. But Mr Trump told Fox News it would "not apply to people living in the country", adding that Muslims serving in the US military would "come home".

Mr Trump's statement was delivered as the US comes to terms with its deadliest terror attack since 9/11.

Last week a Muslim couple, believed to have been radicalised, opened fire and killed 14 people at a health centre in San Bernardino.

Mr Trump's proposed ban prompted a horrified reaction from Republicans and others.

Rival candidate Jeb Bush called Mr Trump "unhinged", while former US Vice-President Dick Cheney said it "goes against everything we stand for and believe in".

Mr Trump's comments were contrary to US values and its national security interests, a statement from the White House said.

The UK's Conservative Prime Minister David Cameron said they were "divisive, unhelpful and quite simply wrong".

"Donald Trump sounds more like a leader of a lynch mob than a great nation like ours,'' said Nihad Awad, national executive director of the Council on American-Islamic Relations.

"These are not just words... Trump and Carson's mainstreaming of Islamophobia in the election is inciting discrimination, hate crimes, violent attacks against Muslims and mosques."

The pro-Jewish Anti-Defamation League said the plan was "deeply offensive and runs contrary to our nation's deepest values.

"In the Jewish community, we know all too well what can happen when a particular religious group is singled out for stereotyping and scapegoating."

Meanwhile, the Democratic mayor of St Petersburg, Florida, announced to Twitter plaudits that he was "hereby barring Donald Trump from entering St Petersburg until we fully understand the dangerous threat posed by all Trumps".

Mr Trump took part in heated interviews on several US television networks on Tuesday, defending the proposal and saying it was temporary measure to prevent "many more World Trade Centers".

On ABC's Good Morning America, he said "what I'm doing is no different than FDR," referring to policies implemented by President Franklin Roosevelt during World War Two against Japanese, German and Italian people in the US. Some of those measures saw over 100,000 people detained in government camps.

At one point during a lengthy interview on MSNBC, presenter Joe Scarborough forced the network into a commercial break after the candidate repeatedly talked over journalists, refusing to answer questions.

Some of his Republican rivals - mindful, perhaps, that Mr Trump's more outlandish proposals only appear to have bolstered his poll ratings - were more nuanced in their criticism.

Carly Fiorina used her response to take simultaneous aim at President Barack Obama, saying his "overreaction is as dangerous as President Obama's under-reaction" - while Ted Cruz said: "Well, that is not my policy."

Ben Carson said visitors to the US should be monitored, but added: "I do not and would not advocate being selective on one's religion."

He garnered loud cheers when he repeated his ban pledge at a South Carolina rally hours after his initial statement.

The UN refugee agency UNHCR said it was concerned that the rhetoric was putting an "incredibly important" resettlement programme for vulnerable Syrian refugees at risk.

Spokeswoman Melissa Fleming said remarks not just by Mr Trump but by a number of US state governors could undermine a programme designed to help the most vulnerable refugees.

The US currently accepts several thousand refugees for resettlement each year, following a rigorous security screening which lasts around two years.

Mr Trump's statement to reporters on Monday said polling by the Center for Security Policy, a conservative think-tank, suggested that 25 percent of Muslims in the US believed violence against America was justified.

"Without looking at the various polling data, it is obvious to anybody the hatred is beyond comprehension. Where this hatred comes from and why, we will have to determine.

"Until we [do]... our country cannot be the victims of horrendous attacks by people that believe only in jihad."

On Sunday, President Obama made a rare Oval Office address in response to the San Bernardino attack and warned against the US falling prey to divisiveness.