Republican presidential candidate Donald Trump has called for a "total and complete" halt to Muslims entering the US, in the wake of the deadly California shootings. 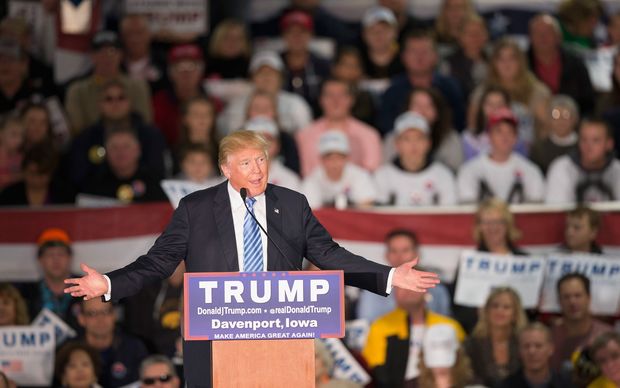 He said that polling showed a "hatred" by Muslims towards Americans that could put the nation at risk.

The border shutdown should remain "until our country's representatives can figure out what is going on".

Mr Trump has also called for a wall on the Mexico border.

In recent weeks, since the Paris terror attacks, he has turned his attention to the Muslim population in the US, calling for the surveillance of mosques and a Muslim registration database.

This rhetoric has increased in the wake of the attacks in California last week, carried out by a Muslim couple believed to have been radicalised.

They opened fire and killed 14 people at a health centre in San Bernardino.

Mr Trump's statement to reporters on Monday said polling firms like Pew Research had data that showed a hatred by Muslims against Americans.

"Without looking at the various polling data, it is obvious to anybody the hatred is beyond comprehension.

"Where this hatred comes from and why, we will have to determine.

"Until we are able to determine and understand this problem and the dangerous threat it poses, our country cannot be the victims of horrendous attacks by people that believe only in Jihad, and have no sense of reason or respect for human life."

When asked by The Hill if that included Muslim Americans who may currently be abroad, his spokeswoman said: "Mr Trump says everyone."

Soon after his statement was released, Mr Trump's Republican rival Ben Carson called on all visitors to the US to "register and be monitored" during their stay.

But his spokesman added: "We do not and would not advocate being selective on one's religion."