Japanese whaling ships have departed for this year's Antarctic hunt, despite international opposition.

The ships left from the port of Shimonoseki in south-western Japan. 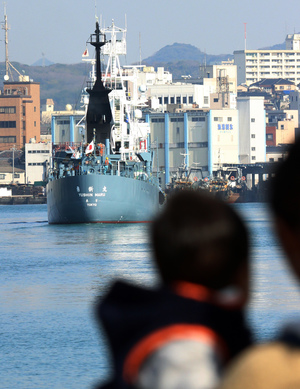 A ship leaves the port of Shimonoseki on Tuesday. Photo: AFP

Japan says its whaling programme is for scientific research - one of the exceptions in which whaling is allowed under international rules.

But, in 2014, the International Court of Justice (ICJ) ruled its Antarctic hunt did not qualify as scientific and should cease.

That season, Japan said it would respect the decision and did not catch any whales in the Antarctic, although it did go ahead with a smaller hunt in the Pacific.

Japan's Fisheries Agency said on Monday it had taken into account the ICJ's ruling and this year aimed to catch only 333 Antarctic minke whales - about one third of previous targets.

Several nations, including New Zealand, have voiced their dismay at the resumption of the hunts, as have environmental activists.

"It's not scientific research, it's straight-up commercial whaling, and it's been declared illegal by the International Court of Justice," Nathaniel Pelle from Greenpeace Australia told AFP.

Shimonoseki mayor Tomoaki Nakao was wholeheartedly behind the resumption.

"There's nothing as happy as this day," he said at a ceremony for the fleet's crew before they set sail.

The hunt itself will run from late December until March next year, according to Japan's Fisheries Agency. The decision to resume was announced just days before Tuesday's sailing.

An undated file picture of a minke whale on the deck of a Japanese whaling ship in the Antarctic Ocean. Photo: AFP / Institute of Cetacean Research

The International Whaling Commission (IWC), which regulates the industry, agreed a pause - commonly now known as the moratorium - on whaling, to begin from the 1985/6 season. Japan agreed to the moratorium but has since continued whaling under the scientific research exemption.

Some other whaling nations, for example Norway, continue having simply lodged formal objections to the moratorium. While indigenous groups that whale are permitted under an "Aboriginal subsistence" exemption.