Turkey is preparing to return the body of the Russian pilot who was killed after his plane was shot down on the Syrian border. 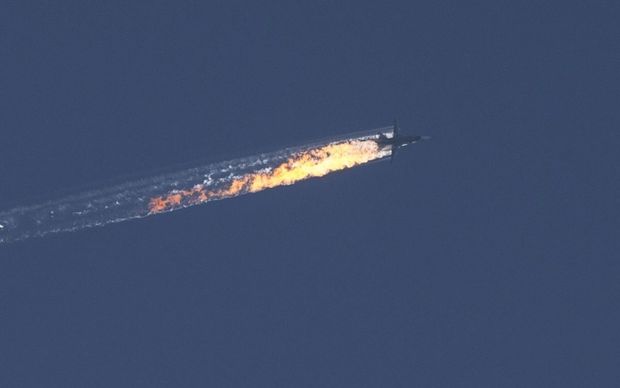 Lt Col Oleg Peshkov's body was received by Turkish authorities at the Syrian border earlier in the day.

Turkish forces shot down the plane saying it had violated Turkish airspace, which Russia denies.

The incident has sparked a furious row between the two countries, with Russia announcing sanctions against Turkey.

Rebels from Syria's ethnic Turkmen community opened fire on Lt Col Peshkov and his co-pilot as they tried to parachute into government-held territory on Tuesday.

The rebels said he had died by the time he reached the ground.

His body was flown from the border to the Turkish capital Ankara on Saturday afternoon, from where it will be taken to Moscow.

Another pilot in the plane, Capt Konstantin Murakhtin, survived and was rescued from rebel-held territory in Syria in a special forces operation.

Capt Murakhtin said he wanted to go back to duty and stay in Syria, saying "someone has to pay" for his colleague's death.

A decree signed by President Vladimir Putin on Saturday covers imports from Turkey, the work of Turkish companies in Russia and any Turkish nationals working for Russian companies.

The decree also calls for an end to charter flights between the countries.

Turkish President Recep Tayyip Erdogan has refused to apologise to Russia over the incident.

On Friday, he accused Moscow of "playing with fire" in its Syria operations. But on Saturday, he said he was "saddened" by the downing of the jet.