A Thai military court today indicted two men accused of carrying out a Bangkok bomb attack that killed 20 people in August, including 14 foreigners, making it the deadliest such incident in Thai history. 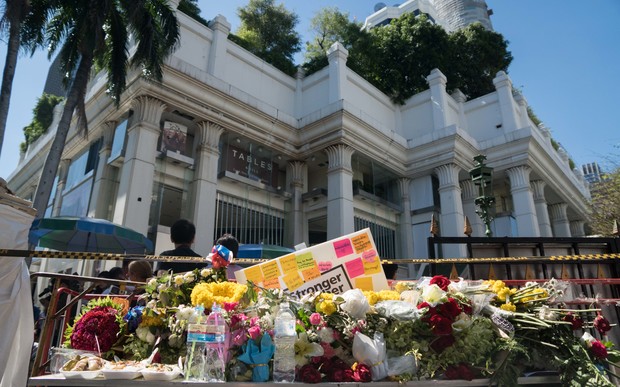 Flowers are laid at the entrance to the reopened Erawan Shrine in Bangkok. Photo: AFP

A lawyer for one of the men said a Bangkok military court brought brought 10 charges against the pair, including premeditated murder, illegal possession of weapons and murder, for the bombing in August.

The two men were named as Bilal Mohammad and Mierali Yusufu.

Documents sent by prosecutors to the court said both men were Chinese nationals from the Uighur minority.

The attack at the Erawan Shrine, a major landmark in the heart of Bangkok, injured more than 120 people.

Thai police have said the blast was revenge for a crackdown on human trafficking. They ruled out any link to the repatriation of 109 Muslim Uighur people to China in July.

The Uighur are a Turkic-language speaking group that calls China's western Xinjian region home. Some Turks see themselves as sharing cultural and religious bond with their Uighur "brothers".

The Uighur issue is sensitive for the Thai government and any link between the bomb and the deportation of people at China's behest could expose it to censure that its foreign policy led to the bomb attack.

Uighurs, who are mostly Muslim, say they flee China's Xinjiang region due to persecution. Beijing rejects that.

Mr Mohammad and Mr Yusufu have been held at an army base in Bangkok since their arrests in August and September.

The motive for the bombing remains unclear and no group has claimed responsibility for the attack.

Police have released arrest warrants for 17 people over charges stemming from the Bangkok attack but say many have fled abroad.

Lawyer Schoochart Kanpai, who was representing one of the two men, said interpreters were being arranged for both suspects as they could not communicate with interpreters provided by police.

The charges were being translated from Thai into English, he said, and the men will formally hear the charges against them on 16 February.