Dozens of people are still missing two days after a landslide near a jade mine in northern Myanmar smashed into a makeshift settlement, burying mine workers as they slept. 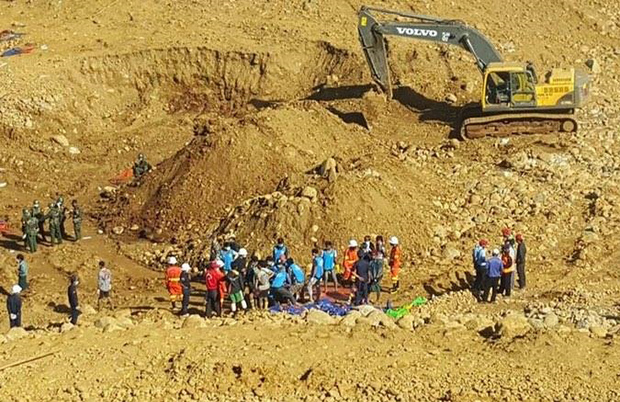 Soldiers and rescue workers search for the bodies of miners killed in the landslide in Hpakhant, in nothern Myanmar. Photo: AFP

It was unclear what caused the mountain of mining debris to give way early on Saturday in Hpakant, a mountainous area in Kachin State that produces some of the world's highest-quality jade.

Many of the dead were scavengers living on or near the mine's waste dumps, who would search through the debris in the hope of finding fragments of jade to sell.

The mines and soil dump sites are hazardous and deaths among workers are common.

About 100 people are still missing, according to officials in the region, and the death toll was expected to rise as the search resumed on Monday, Hpakant Township Administration Department head Tin Swe Myint said.

"We just don't know how many people exactly were buried since we don't have any data on people living there.

"It was just a slum with these ... workers living in makeshift tents."

A huge rescue operation is underway with the Myanmar Red Cross, the army, police and local community groups all at the scene trying to dig people out of the earth.

Workers, many of them migrants from elsewhere in Myanmar, toiled long hours in dangerous conditions searching for the precious stones.

Ko Sai, a miner who was at a nearby camp, said the landslide hit around 3am (9.30am NZT), when many miners were sleeping.

"We just heard a loud noise sounding like thunder and saw that the huge mountain collapsed and a huge wave of rubble was moving and sprawling on a wide area," Ko Sai said. 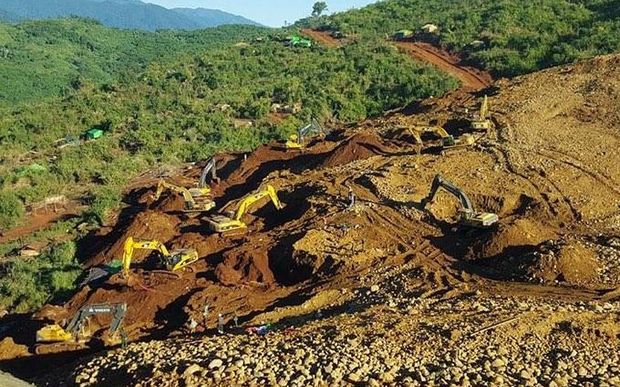 The scene of the massive landslide, which has claimed over 100 lives. Photo: AFP

Only one person had been pulled alive from the rubble but had died soon afterwards, another local official told AFP.

Several companies had dumped mining debris at the 200-acre dump site, Tin Swe Myint said. The dump was near a mine controlled by the Triple One Jade Mining Company.

Much of the jade that is mined in Hpakant is believed to be smuggled to neighbouring China, where the stone is highly valued.

The value of jade production in Myanmar is estimated to have been about $US31 billion in 2014, according to researchers from environmental advocacy group Global Witness, which published a report on the opaque sector earlier this year.

Local people in mining areas accuse the mining industry of a series of abuses, including poor on-site health and safety and frequent land confiscation.

Many jade mining areas have been turned into a moon-like areas of environmental destruction as huge diggers churn the earth in search of the translucent green stones. 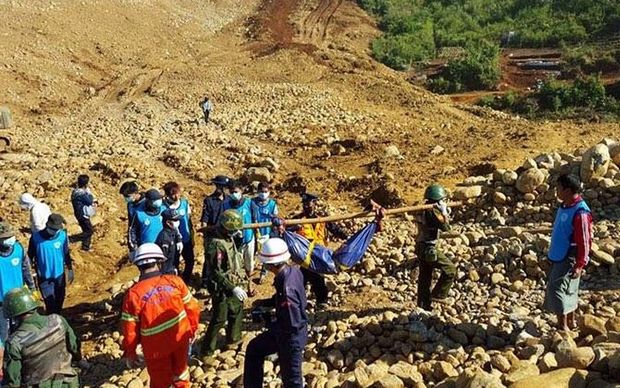 Search and rescue teams remove a body from the scene of the landslide. Photo: AFP