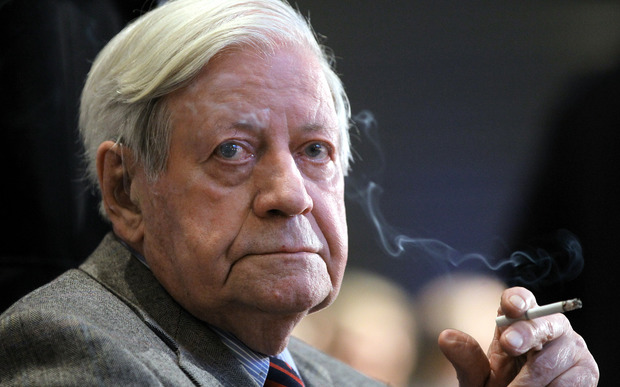 Mr Schmidt, who was a Social Democrat, was an architect of the European Monetary System, which linked EU currencies and was a key step on the path to the euro.

He was credited with helping to consolidate the country's post-war economic boom.

He is seen as one of the most popular German leaders since World War II.

Mr Schmidt died yesterday in his home city of Hamburg, his doctor Heiner Greten was quoted as saying by German media.

The doctor provided no further details.

Reacting to the news, European Parliament President Martin Schulz said he was "deeply affected" by the death.

"He was an outstanding chancellor, his death marks a turning point for Germany and Europe," he said.

European Commission President Jean-Claude Juncker said: "The news of the death of Helmut Schmidt has moved me deeply."

He added that Europe lost "a special man whose political courage has moved many."

"He was a man who, until his final breath, knew how to give a speech and especially to tell Germans that they had a role to play... that it was within Europe that they should act", Mr Hollande said.

By 1972, Mr Schmidt was finance minister in the government of Willy Brandt, a brilliant manager of the economic miracle. Two years later he himself was chancellor.

The Berlin Wall dividing West and East Germany was the front line in a dangerous Cold War at the time.

With skilled diplomacy, Mr Schmidt pursued detente with communist leaders on the other side, but when the Soviet Union stepped up the arms race, he stood firm.

Strongly pro-European, Mr Schmidt together with French leaders launched the European Monetary System in 1979. This later paved the way for the euro.

He will also be remembered for leading his country through a period of political violence in which groups - such as the Red Army Faction - carried out bombings and kidnappings, our correspondent says.

In 1982, the coalition led by Mr Schmidt's party collapsed and he lost power to Helmut Kohl.

Born in a tough, working-class district of Hamburg in 1918, a month after the end of World War I, Mr Schmidt spent his early years in a Germany wracked by political, economic and social strife.

Aged 14 when the Nazi Party came to power, he became a group leader in the Hitler Youth, joined the German army in 1937 and, during World War II, saw action on both the eastern and western fronts.

Promoted to first lieutenant rank and the recipient of an Iron Cross, Mr Schmidt was captured by the British after the Battle of the Bulge in the winter of 1944-45.

While in captivity, his fellow prisoners of war convinced him to become a Social Democrat. Joining the party on demobilisation in 1946, he progressed effortlessly through its ranks.

He graduated from Hamburg University in 1949, having been national chairman of the Social Democrats' student wing, and became an economic adviser to the Hamburg government.

He was elected to the federal parliament in 1953, where his verbosity soon earned him the nickname "Schmidt-Schnauze" (Schmidt the Lip)