Russia's security chief says an act of terror brought down the Russian A321 airliner in Egypt last month, killing all 224 people on board. 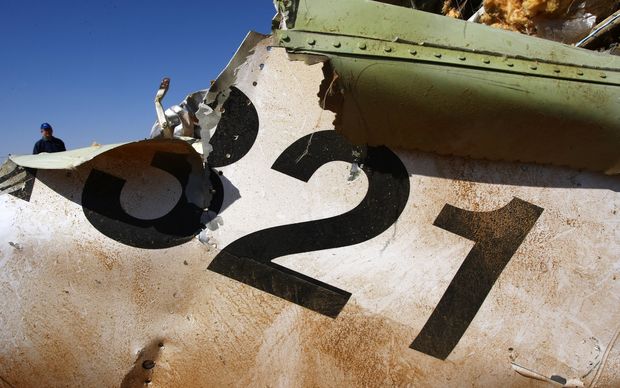 Wreckage from the Russian A321 airliner that crashed in Egypt last month. Photo: AFP

Mr Putin vowed to "find and punish" those behind the attack over the Sinai peninsula. A branch of so-called Islamic State said it downed the plane.

Nearly all the dead were Russians.

In a statement on the Kremlin's website, Mr Bortnikov said a bomb had been planted on board the Kogalymavia jet, equivalent to up to 1kg of TNT.

It blew up on 31 October, shattering the plane mid-air, he said, "which explains the wide dispersal of fuselage pieces".

Mr Putin said that Russia must hunt those responsible "indefinitely, find out who the individuals were".

"We'll look for them everywhere, wherever they are hiding. We'll find them in any corner of the planet and punish them."

Most of the passengers were Russian tourists flying home from the Red Sea resort of Sharm el-Sheikh.

Mr Putin also said that Russia's air strikes in Syria "must not only be continued - they must be intensified so that the criminals understand that retribution is inevitable".

Russian warplanes are supporting Syrian government forces against various rebel groups, including so-called Islamic State (IS) militants and other Islamists.

Russia's military commanders were also at the meeting with Mr Putin and the Federal Security Service (FSB) chief.