Democratic presidential hopefuls have clashed over how to deal with militant group Islamic State, in the wake of deadly terror attacks in Paris. 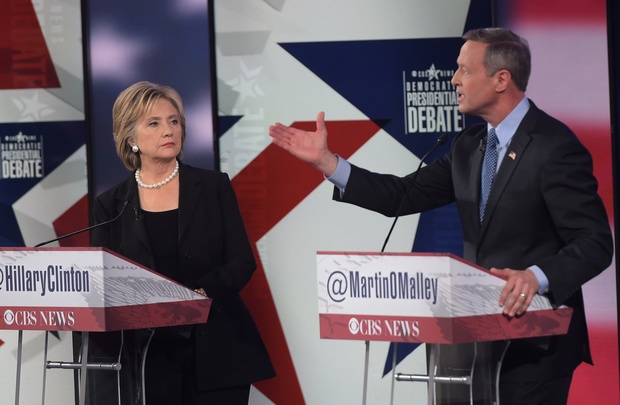 Hillary Clinton, speaking on a debate stage in Iowa, said "it cannot be an American fight" and called on Turkey and the Gulf states to do more.

But rival Martin O'Malley disagreed and said the US had to "stand up to evil" and lead from the front.

The attacks killed 129 people and injured hundreds in the French capital.

Hours after the near-simultaneous attacks on Friday, CBS News vowed to shift the focus of the debate to put more emphasis on counter-terrorism and foreign policy.

A moment's silence was observed in Des Moines before the debate began, and the three candidates expressed their condolences with France.

But then they clashed over the rise of IS, which has claimed responsibility for the atrocities.

Mrs Clinton, the former secretary of state, was challenged by Vermont Senator Bernie Sanders for backing the Iraq War, which he said led to the rise of the militants.

She said the US did not have the "bulk of responsibility" for the instability in the region, pointing instead to Syrian President Bashar al-Assad and Iraq's former leader, Nouri al-Malaki.

IS cannot be contained, it must be defeated, Mrs Clinton said, but she and the other candidates did not spell out how far they would go.

The US has been part of a coalition of countries taking part in air strikes against IS in Syria and Iraq, but some of the Republican presidential candidates have called for the deployment of US ground forces.

In other debate highlights:

This primetime showdown was the party's second debate of the election campaign, two fewer than the Republicans, who have a much wider field.

In 79 days, Iowa will be the first state to pick a presidential candidate from each party.

Voters across the US will go to the polls in November 2016 to choose their new president.