US Republicans have traded blows in a heated presidential debate in Colorado that featured several angry exchanges. 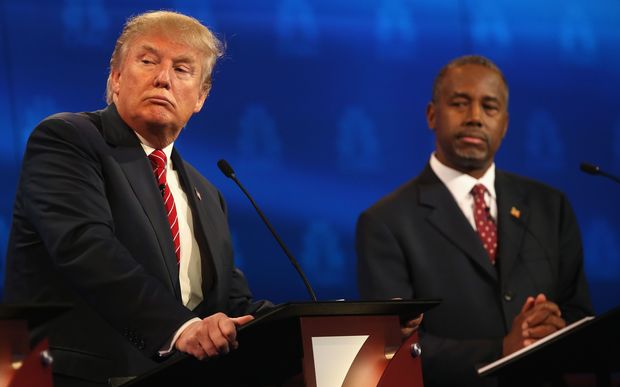 Frontrunners Donald Trump and Ben Carson, with no political experience, were under attack from the start.

Ohio Governor John Kasich condemned their "fantasy tax plans" and added: "We can't elect someone who doesn't know how to do the job."

Mr Carson, a retired neurosurgeon who has edged past Mr Trump in national polls, had a quiet night in Boulder.

His tax proposal, which is based on biblical tithes, was decried by Mr Kasich, who also dismissed Mr Trump's plan to deport 11 million undocumented immigrants and build a wall on the Mexico border.

Political friendships were strained by some of the testy exchanges, notably one between former Florida Governor Jeb Bush and Florida Senator Marco Rubio.

Mr Bush urged Mr Rubio, once his protege, to resign from the Senate because of his poor voting record.

The media were also in the firing line - Texas Senator Ted Cruz got the night's biggest applause when he attacked the hosts, CNBC for stirring confrontation.

"The questions that have been asked so far in this debate illustrate why the American people don't trust the media. This is not a cage match."

The hostility against CNBC continued after the debate when Republican National Committee chairman Reince Priebus complained about the "gotcha questions".

The four lowest-polling Republican candidates squared off in an early debate.

Mr Graham, the South Carolina senator, got the most laughs, especially when he said Democratic candidate Bernie Sanders "went to the Soviet Union on his honeymoon and I don't think he ever came back".

Primary voting begins in February in Iowa, 10 months before the nation goes to the polls to vote for its new president.